Results Are in for 6 Heavily Hispanic Battleground House Races 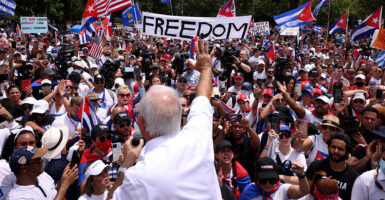 “You’re looking at a very measurable, viable, sustainable, long-term shift from the Hispanic electorate serving as a de facto key constituency of the Democratic Party to now emerging as the quintessential independent voting bloc that is conservative,” Rev. Samuel Rodriguez, president of the National Hispanic Christian Leadership Conference, told The Daily Signal. He added that Hispanics are “not necessarily completely Republican, [but] it’s definitely, definitely no longer part of this Democratic train.”

Since the most recent midterm elections in 2018, Hispanic Americans have become the fastest-growing ethnic group among the country’s electorate, according to the Pew Research Center. There are estimated to be 34.5 million eligible Latino voters in America this year.

Given the shifting political tide among the Hispanic community, political strategists were closely watching three Texas and three Florida House districts that are largely Latino. Here’s what happened in those districts.

Texas’ newly drawn 15th Congressional District, which is 250 miles long, is about 80% Hispanic and was considered a highly completive House race. There was no incumbent in the race because of redistricting.

Sen. Bernie Sanders, I-Vt., held a rally with Vallejo before the election to energize progressive voters in the district.

“The vote right here in this district could determine which party controls the U.S. House of Representatives, and I think the choice is clear,” Sanders said to the crowd. “The choice is whether we give more tax breaks to billionaires and cut Social Security, Medicare, Medicaid, education, and other needed programs—or whether we stand up for the working class of this country. Michelle Vallejo is on the right side.”

Former President Donald Trump endorsed De La Cruz and called her a “real star” at a rally in the South Texas city of Robstown in October.

Steve Shepard, Politico’s chief election reporter, says Texas’ 15th Congressional District is an example of “Republicans’ surge in the Rio Grande Valley.” Democratic Rep. Vicente Gonzalez won the district by 21 points in 2018, but that lead shrunk to just 3 points in 2020.

Cuellar won with 56% of the vote after 94% of the vote had been counted Tuesday night, according The New York Times.

A large section of the South Texas district, which is about 78% Hispanic, borders Mexico.

Tuesday night was Cuellar’s 10th victory for the House seat.

He is considered to be a moderate Democrat, opposing abortion and advocating for Second Amendment rights and a secure border. He narrowly survived Democratic primary challenges from the Left in both 2020 and 2022.

Garcia previously served as deputy state director for Sen. Ted Cruz, R-Texas. In 2020, Trump, then president, appointed her to serve as commissioner for the White House Hispanic Prosperity Initiative.

Texas Gov. Greg Abbott, a Republican, endorsed Garcia on Oct. 19, saying that as the “wife of a Border Patrol agent, she knows firsthand the consequences of President [Joe] Biden’s open border policies. Her proven record in public service will help her deliver results for the people of South Texas.”

With 95% of the vote counted, The New York Times called the race for Gonzalez, who had a 9% lead over Flores as votes continued to be counted Tuesday night.

Flores made history over the summer when, during a special election, she won the South Texas congressional seat that had been occupied by Democrats for more than 100 years.

Flores’ victory several months ago “speaks to Ronald Reagan’s message of ‘Hispanics are Republican. They just don’t know it yet,’” Cesar Ybarra of FreedomWorks said on “The Daily Signal Podcast” in June.

“Republicans have been doing a better job at explaining the Republican Party platform to Hispanic voters,” Ybarra said. “This has been amplified just by the terrible job that President Biden and the congressional Democrats have been doing with the economy.”

Gonzalez currently serves as the representative for Texas’ 15th Congressional District, but chose to run in the 34th District after the state’s new political map was drawn.

In the 2018 general election, Gonzalez soundly defeated his opponent with about 60% of the vote.

Polling data from RMG Research reported by FiveThirtyEight had estimated a 4-percentage-point victory for Gonzalez.

Soto won reelection with 54% of the vote, The New York Times reported Tuesday night with 87% of the vote counted.

The district is centrally located in the state and is about 40% Hispanic.

Soto was first elected to represent Florida’s 9th Congressional District in 2016. Soto’s Republican opponent did not have a background in politics. Moore writes on his campaign website that he spent 20 years working for a Christian nonprofit, but decided to get involved in politics because the “direction and condition of our awesome country concerns me.”

The district is almost 70% Hispanic and is located within Miami-Dade County in the southern part of the state.

Her victory Tuesday was determined less than two hours after polls closed, winning the seat with 57% of the vote with The New York Times reporting 95% of votes counted.

Salazar ran on an anti-socialism platform, writing on her campaign website that “the Left want[s] to implement socialism in this country,” while she promises to “preserve and protect the freedoms and values that make this country the most extraordinary country in the history of the world.”

In a recent campaign ad, Taddeo said, “This election will determine if we remain a beacon of freedom or we become a socialist dictatorship.” She called Salazar a “MAGA Republican” who “supports government control over women’s health care decisions.”

Gimenez is reported to have won the seat with 64% of the vote with 95% of votes counted as of early Wednesday morning, The New York Times reported.

Florida’s 28th District is a new district created after the 2020 census. The district absorbed most of Florida’s former 26th District, which is currently represented by Gimenez.

Gimenez was elected to serve Florida’s 26th District in 2020 and was projected to defeat Asencio, a retired police captain, in Florida’s new southernmost district. Before being elected to Congress, Gimenez served as mayor of Miami-Dade County.

“Gimenez has a keen sense of the changing politics of South Florida,” Politico’s Shepard writes in his analysis of the race. “As the mayor of Miami-Dade County, he endorsed Hillary Clinton in 2016—then flipped to back then-President Donald Trump in 2020, when he was going to challenge the then-incumbent, Democrat Debbie Mucarsel-Powell. It worked: Gimenez won the GOP nomination, and then beat Mucarsel-Powell by 3 points.”