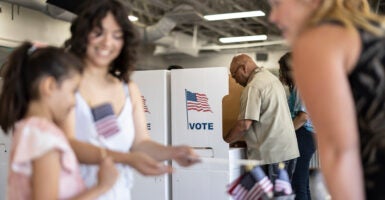 The amendment, known as Proposal 2, passed with more than 58% of the vote.

“I’d like to thank the millions of Michigan voters who said, ‘Yes’ to Proposal 2 which protects the fundamental right to vote while enhancing security and expanding the accessibility of Michigan’s future elections,” Micheal Davis, executive director of Promote the Vote, said in a prepared statement Tuesday night.

“Michigan voters clearly support ensuring every voice is heard and every vote is counted in every election no matter what political party or candidate we support, where we live or what we look like,” Davis said.

Opponents to the amendment warn that the passage of Proposal 2 makes Michigan elections more susceptible to voter fraud.

“In voting to approve Michigan Proposal 2, the voters of Michigan were conned by the deceptive language of its proponents into gutting voting ID requirements and implementing other reckless changes that will imperil the security and integrity of fair and honest elections in the state,” Hans von Spakovsky, the manager of the Election Law Reform Initiative and senior legal fellow at The Heritage Foundation, told The Daily Signal in an email. (The Daily Signal is the news outlet of The Heritage Foundation.)

The proposal will amend the state constitution to include, in summary:

The coalition that opposed Proposal 2, Secure MI Vote, said in a statement that advocates of the state constitutional amendment “will try to say ‘signing an affidavit’ is the same thing [as ID] but it is not. Someone will be able to walk into their voting precinct and sign their names and receive a regular ballot without ever showing an ID.”

The amendment “will open up more possibilities to not trust our elections,” the coalition says.

Proposal 2 “eliminates any effort that we could do to require a voter ID,” Michigan Republican state Rep. Steven Johnson told The Daily Signal. The amendment would allow voters to either sign the affidavit in place of ID or show various alternative forms of identification, such as IDs “given by a local union of government” and “school ID,” Johnson said.

The Center for Tech and Civic Life, which enjoyed a large influx of cash from Meta CEO Mark Zuckerberg in 2020, invested heavily in the public administration of elections that year. Critics like Mollie Hemingway have noted that counties in Georgia—for instance—that voted for Donald Trump received an average of $1.91 per registered voter, while counties that voted for Joe Biden received an average of $7.13 per voter. Hemingway and others have claimed that these funds helped swing the election in Biden’s favor.

Proposal 2 was an effort to put “into the constitution what is already being done in practice in the state of Michigan,” Rabhi said.

While the Democrat lawmaker said there are pieces of the amendment he does not like, he believes it is “overwhelmingly good.”

The Daily Signal’s Tyler O’Neil contributed to this report.