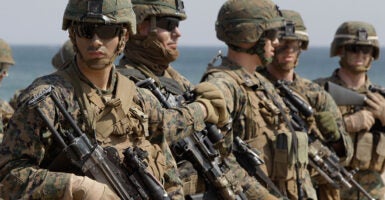 The U.S. Marine Corps, which celebrates its 247th birthday Thursday, has done two extraordinary things for nearly all its existence: The Corps adapted to warfare as enemies, geography, and technology changed while not only sustaining but deepening its sense of self, warfighting ethos, and purpose.

Sometimes an organization derives its identity from a specific product or service. Such focus leads an organization and its people to excel in that one thing, but this carries the risk of organizational failure when change overtakes that single thing.

Other organizations realize that their core strength comes from seeing how the world is changing around them and making essential adjustments that keep them relevant and effective. Resilient organizations not only survive, they thrive.

The Marine Corps’ success has not depended on any specific weapon or formation, but on its ability to adapt to the demands of war as war itself has changed. The Corps has done this for nearly 250 years, and is in the midst of yet another effort to adapt itself to ensure it will continue to win in battle.

This is the secret to making Marines: instilling in them the warrior spirit that keeps its eye on the prize—winning in combat—by doing whatever it takes to defeat an enemy in battle, regardless of the time, place, or instruments of war.

Established by the Second Continental Congress on Nov. 10, 1775, the Marine Corps was needed by the fledgling government to protect America’s interests beyond its shores even before the United States was formally a country.

The Corps cobbled together by Capt. Samuel Nicholas, commissioned by Congress to raise two battalions of Marines, immediately rose to the occasion. It deployed just two months later aboard the USS Alfred, a hastily converted merchant ship. The Corps conducted its first amphibious landing in March 1776, less than four months after being established, to seize British weapons and provisions stored on New Providence Island in the Bahamas.

With that auspicious start, the Corps quickly gained its sea legs and set about accruing deep experience in operations abroad and at home, both from the sea in daring raids ashore and in sustained land operations as circumstances demanded.

Whether battling Barbary pirates along the north coast of Africa or Great Britain, again, in the early 1800s, Marines used the sea to project power ashore. The Seminole Wars in Florida and a war against Mexico followed in the 1830s and 1840s. During the 1850s, the Corps guarded U.S. interests in Panama and further afield in Japan, repeatedly demonstrating its ability to join with the Navy to deploy American combat power wherever needed.

In the closing days of the 19th century, Marines found action in Cuba, Puerto Rico, and the Philippines. Success in those places, combined with America’s growing global reach, caused Congress to confer primary responsibility on the Corps for the seizure and defense of advanced naval bases, a mission it has maintained ever since. A series of small wars followed in Latin America until the Corps deployed to French battlefields in World War I, achieving singular honors at Chateau Thierry, Soissons, and Belleau Wood.

The Corps excelled in even larger land operations in the 1940s, ’50s, and ’60s, but this time in the Asia-Pacific: the island campaigns of World War II, landings at Inchon in Korea alongside mountain fighting against the Chinese at Chosin, and years of sustained combat in Vietnam.

Each of these combat actions were enabled not only by the Marine Corps’ mastery of amphibious operations in the face of fierce enemy resistance, but also by its ability to adapt new technologies, tactics, and organizational formations to battle.

Today, Russia’s war against Ukraine and recent actions in the South Caucasus and on the Arabian Peninsula show the increasing use of unmanned systems, long-range rockets and missiles, advanced sensors, and cyber and space capabilities.

As the Corps looks not only to the expanding power of China in the Indo-Pacific, but also potential battlefields in the Middle East, Africa, and Northern Europe, it once again is taking stock of new tools, weapons, equipment, tactics, and formations to ensure it is “most ready when the nation is least ready” and maintains focus on its primary mission as an amphibious force in readiness. Marines also remain deeply rooted in their historically proven warfighting ethos.

The Marine Corps’ birthdays are moments to celebrate a storied past and to share in the common bond that unites all Marines across time and place. But these birthdays are also moments to ponder the future and to consider how the Corps will draw from its legacy of adaptation to ensure it is relevant and effective in battles yet to be fought.

Happy birthday, Marines! You have so much to be proud of in your past and so much pride to take in your preparation for the future.