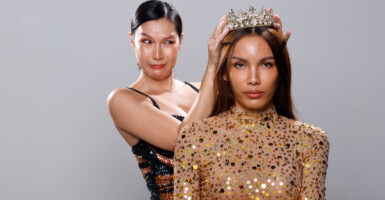 If the producers of Broadway's “Hamilton” may decide to cast black actors in most roles, the court concludes, the Miss United States of America pageant may reject contestants who aren’t what it’s looking for. (Photo illustration: JadeThaiCatwalk/Getty Images)

File this one under “outcomes we could have predicted.”

A federal court last week determined that a beauty pageant association could exclude a transgender “female” (i.e., a male) from participating in one of its contests.

The decision Wednesday by the U.S. Court of Appeals for the 9th Circuit was a major win for the First Amendment right to be free from compelled speech.

Like the trial court, the appeals court rejected Green’s argument, explaining that beauty pageants, as a type of theatrical production, enjoy the First Amendment’s protection of freedom of speech or expressive conduct.  The U.S. Supreme Court has held—in Southeastern Productions v. Conrad (1975) and Hurley v. Irish-American Gay, Lesbian, and Bisexual Group of Boston (1995), for example—that expressive conduct of this kind is entitled to the same First Amendment protection as any other form of speech.

In writing for the 2-1 majority, Judge Lawrence VanDyke described the type of speech involved in the case. In the same way that picketing involves holding a sign or leafleting involves standing on a sidewalk, VanDyke said, certain types of expressive conduct, including beauty pageants, allow “no daylight between speech and speaker.”

Through the very act of holding a beauty pageant, the Miss United States of America organization was expressing its message: “This is the ideal vision of American womanhood.” By including and excluding certain people from participation, the pageant was choosing the best way to express that message.

If producers of the hit Broadway musical “Hamilton” may decide to cast black actors in most roles, the court concluded in one analogy, the Miss United States of America pageant may reject contestants who aren’t what it’s looking for.

Green claimed, remarkably, that no meaningful difference exists between Green and any of the pageant’s cisgender (biological) female contestants. But the appeals court disagreed, noting that Green’s belief was precisely the opposite of the message the pageant sought to communicate and what the First Amendment allowed the pageant to express.

This was so even if transgender contestants had not communicated their transgender status outside the pageant and otherwise were indistinguishable from “natural born female” contestants, the two judges found. Forcing the pageant to adopt Green’s opinion fundamentally would alter what the pageant was communicating, that is, its view of who qualifies as an “ideal woman.”

Writing for the majority, VanDyke described the pageant’s precise message:

Under the First Amendment, VanDyke explained, any restriction on expressive conduct must be a narrowly tailored means of achieving a compelling government purpose —a standard known as “strict scrutiny.”

The state of Oregon’s “compelling interest” behind passage of the Oregon Public Accommodations Act was in “eliminating discrimination against LGBTQ individuals.” Application of this law to the beauty pageant, however,  necessarily would force the pageant to change its intended message and eliminate its “natural born female” rule and this, the appeals court determined, could not withstand strict scrutiny.

Green offers nothing more precise [than a desire to eliminate discrimination against LGBTQ individuals], and instead admits that Miss United States of America has done nothing to prevent Green from participating in other pageants or to prevent Green from expressing any message by any other means.

The factual record in the case includes an exchange between Green and Tanice Smith, national director of the Miss United States of America pageant association. Smith told Green that competing in the pageant wasn’t an option, but offered to help find a pageant for which Green would qualify.

Green’s response was curt: “Well, I’ll talk to my attorney about this then, because discrimination is unacceptable.”

Unacceptable? How about eliminating someone’s constitutional right to decide the messages they want and don’t want to convey?

As the battle over preferred pronouns and compelled speech picks up, the legal victory of the Miss United States of America pageant undoubtedly will shape such cases in the future.

This term, in fact, the U.S. Supreme Court will consider another showdown between a state’s anti-discrimination law and free speech.

In 303 Creative v. Elenis, the high court will be asked to decide whether a Christian website designer’s constitutional rights under the Free Speech Clause of the First Amendment were violated when officials used the Colorado Anti-Discrimination Act to force her to create websites for homosexual weddings.