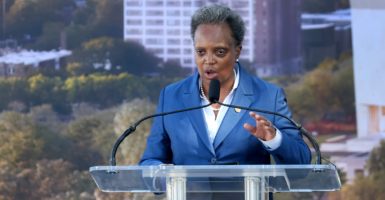 "Those on the Left know that their soft-on-crime policies have wreaked havoc in the cities where they have implemented those policies," the report says. Pictured: Chicago Mayor Lori Lightfoot, a Democrat, speaks during a ceremonial groundbreaking at the Obama Presidential Center on Sept. 28, 2021, in Chicago. (Photo: Scott Olson/Getty Images)

A new report shows that Democrat policies in cities and counties are responsible for rising crime rates in “their otherwise red states.”

The Heritage Foundation today released a 19-page report titled “The Blue City Murder Problem” that includes analysis on crime data and explores who is responsible for rising crime throughout the U.S. (The Daily Signal is Heritage’s multimedia news organization.)

“Those on the Left know that their soft-on-crime policies have wreaked havoc in the cities where they have implemented those policies,” authors Charles Stimson, Zack Smith, and Kevin D. Dayaratna, who are scholars in the Edwin Meese III Center for Judicial and Legal Studies at The Heritage Foundation, wrote in the report.

It is not hard to understand why ‘reforms’ such as ending cash bail, defunding the police, refusing to prosecute entire categories of crimes, letting thousands of convicted felons out of prison early, significantly cutting the prison population, and other ‘progressive’ ideas have led to massive spikes in crime—particularly violent crime, including murder—in the communities where those on the Left have implemented them.

As of June 2022, the top three cities with the highest homicide rates include Chicago, with 304 homicides; Philadelphia, with 240 homicides; and New York, with 197 homicides, the report said.

The report also highlighted that 27 of the top 30 cities with the highest murder rates as of June 2022 were run by Democratic mayors, except for Lexington, Kentucky, and Jacksonville, Florida, which are run by Republican mayors, and Las Vegas, which has an independent mayor.

More specifically, 14 of the 30 cities with the highest murder rates have “[George] Soros-backed or Soros-inspired rogue prosecutors,” the report said.

Some of the prosecutors include:

“There were 2,554 homicides in those 30 cities through June 2022. In the 14 cities with Soros-backed rogue prosecutors, there were 1,752 homicides, representing 68% of homicides in the 30 top homicide cities in the United States,” the report said.

The report was written in response to another report released in March titled “The Red State Murder Problem” by Third Way, which is “a national think tank that champions modern center-left ideas,” according to its website.

“When you remove the crime-infested, homicide-riddled cities from the state murder rate featured in the Third Way study, you dramatically lower the murder rate for that state, upending their conclusions and exposing the piece for what it really is: a straightforward attempt at political projection dressed up as a ‘study,’” The Heritage Foundation report said.

Former Secretary of State Hillary Clinton said on Thursday that Republican-run states have “the highest crime levels” during an appearance on CNN.