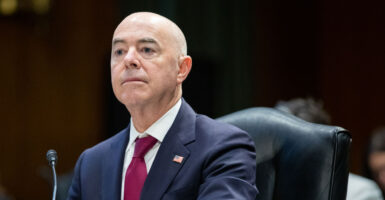 Since 2020, the Department of Homeland Security has been under fire for working with Big Tech companies to censor certain viewpoints mainly related to election integrity. Pictured: Homeland Security Secretary Alejandro Mayorkas responds to lawmakers' questions during a Senate subcommittee hearing at the U.S. Capitol in Washington, D.C., May 4, 2022. (Photo: Amanda Andrade-Rhoades/For The Washington Post via Getty Images)

House Oversight Committee Republicans are kicking off an investigation into what they called a “taxpayer-funded censorship campaign” at the Department of Homeland Security.

Since 2020, the federal agency has been under fire for working with Big Tech companies to censor certain viewpoints mainly related to election integrity. The GOP launched its investigation after Monday’s report by The Intercept dove into how the Feds had begun pressuring tech companies on a range of issues, including COVID-19, the vaccine for it, and Ukraine.

“CISA is framing any dissenting opinion disseminated online as a cyber threat to critical infrastructure,” the letter said. “CISA leverages partnerships with left-leaning private organizations—who have received millions of dollars in federal money—to identify and then take action against political speech unfavorable to the Administration, especially around its handling of COVID-19 policy.”

“This effort began after CISA partnered with left-leaning organizations and Big Tech companies to launch the Election Integrity Partnership,” the letter said. “The EIP provides an online complaint-processing platform that permits groups—including the Democratic National Committee on at least four occasions—to submit ‘tickets’ reporting narratives they flagged for concerns.

“‘Tickets’ were frequently resolved by taking one of several actions: 1) banning the user from posting his or her lawful speech or deplatforming the individual entirely, 2) algorithmically restricting the reach of the speech on the platform, or 3) adding other information, such as a warning label, to the post alerting users to the post’s disfavored status,” the letter added.

The White House has pushed back on criticism, saying it does not use the censorship portal.

“You know, we work to protect that—protect Americans from disinformation that threatens the homeland, including malicious efforts spread by foreign … adversaries … began before the Disinformation Governance Board was established,” White House press secretary Karine Jean-Pierre said at a press briefing Wednesday. “In fact, some of that work began before this administration. I want to be very clear that cross-agency work continues to this day.”

“We are in regular touch with the social media platforms and those engagements typically happen through members of our senior staff and also members of our COVID-19 team given, as Dr. Murthy conveyed, this is a big issue of misinformation, specifically on the pandemic,” Psaki said at a press briefing in July of last year, referring to the U.S. surgeon general, Dr. Vivek Murthy.

This investigation is spearheaded by the Republican minority on the House Oversight Committee. If Republicans take the majority in the House, as current polling suggests, the probe could become a major feature of the second half of President Joe Biden’s first term in office.

“The U.S. Department of Homeland Security has a responsibility to protect the American people, not deliberately target and discredit Americans opposed to the Biden administration’s radical agenda,” Comer said. “Any operation by the department to stifle Americans’ free speech is unacceptable, an abuse of taxpayer dollars, and warrants an immediate congressional investigation. Oversight Republicans expect Secretary Mayorkas to cooperate with congressional oversight into any online content monitoring program implemented by DHS to suppress Americans’ free speech.”

Republican lawmakers argued the Biden administration is actively violating the First Amendment and has already abused its influence of Big Tech companies to spread false information.

“Further, your agency is poorly positioned to moderate speech on social media. In fact, you deliberately spread disinformation in a White House press conference last year surrounding false allegations that your Border Patrol Agents were whipping Haitian migrants at the border in Del Rio, Texas,” the letter said, adding:

At that press conference, you stated that ‘we—our entire nation—saw horrifying images’ that ‘painfully conjured up the worst elements of our nation’s ongoing battle against systemic racism.’ E-mails now reveal that you were made aware—hours before these comments—that the photographer who captured the images you were referring to told news outlets that he and his colleagues ‘never saw agents whipping anyone.’ Armed with the truth, you still perpetuated a false narrative that agents were whipping migrants at the border.