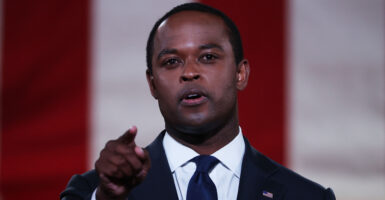 “We write today to request that you, as the executive directors of the Commonwealth’s major public pension systems, advise our Offices about your systems’ efforts to ensure that ESG considerations are not being implemented in your systems’ investment decisions, consistent with Kentucky law,” the letter continues.

The letter gave the pension directors a deadline of Nov. 23 to respond. However, that has been extended to early December after the respective boards of trustees for the pensions meet, Eager told The Daily Signal.

“That is a decision the board will make, not the executive director,” Eager told The Daily Signal in a phone interview.

In a more definitive way, a top official with the state’s Teachers’ Retirement System told The Daily Signal that it is not engaged in ESG investing.

“TRS is happy to respond to the recent letter from the AG and Treasurer as requested,” Beau Barnes, deputy executive secretary and general counsel to the teachers pension system, said in an email. “TRS is not an ESG investor. TRS investment policy makes enhancing and protecting asset value the goal of all investing, which is consistent with TRS’s fiduciary duty under law. This fiduciary responsibility is to achieve the best returns within acceptable levels of risk for its members.”

In a public statement this week, Cameron said: “Rising inflation has made protecting the retirement security of Kentucky’s public employees even more essential. Prioritizing ESG-related investments above the financial interests of investors is inconsistent with Kentucky law, and we’ve sent this letter to ensure these practices are not at work in the Commonwealth.”

Consumers’ Research, a national organization advocating against ESG investing in both the public and private sector, praised Ball and Cameron for taking this stand.

“The joint action of Treasurer Ball and Attorney General Cameron sends a clear message to Kentucky’s pension fund investment managers: their obligations are to work for the pensioners, not the Democratic Party, international climate groups, or megalomaniacs like Larry Fink,” Will Hild, executive director of Consumers’ Research, said in a public statement. “We applaud both officials in standing up for the citizens of Kentucky, who are being crushed due to reckless, illegal actions by companies like BlackRock, Vanguard, and State Street that put progressive politics above their legal and moral duties.”

The Kentucky attorney general’s office issued an opinion in May that pension managers must make investment decisions based on the interest of members and beneficiaries, under state law.

Ball initially requested the attorney general’s opinion on the matter.

“Kentuckians worked hard for decades to earn their pensions and rely on them for livelihood in retirement. It is important their investments are maximized, not politicized,” Ball said in a public statement. “As the watchdog of taxpayer dollars, I remain committed to ensuring funds are invested and spent consistent with the law.”