How Europe’s Energy Crisis Is Becoming an Economic Crisis 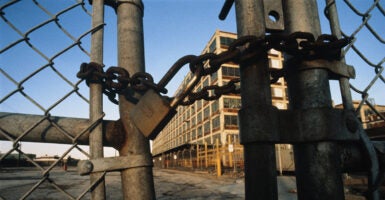 Europe’s energy crisis is becoming an economic crisis. Skyrocketing energy prices are causing companies of all types across the region to cut thousands of jobs, dramatically roll back production, and in some instances, halt business altogether.

In Western Europe, French glass company Arc International has made significant cutbacks due to rising energy prices. The company is a major employer in Northern France but was forced to lay off over 4,000 employees to stay afloat. Of Europe’s current energy crisis, Arc CEO Nicholas Holder notes, “It’s the most dramatic situation we have ever encountered … For energy-intensive businesses like ours, it’s crippling.”

Arc International is not the only one. The crisis has crippled industries across almost every sector of the economy.

Just earlier this month, four German companies, all over a century old, filed for insolvency or bankruptcy within the same 24-hour period. The companies, ranging from a large vehicle textile manufacturer to a small candy company, each declared the high cost of energy as a reason for their financial woes.

Because of the inflated price of energy, the world’s largest chemical company spent an additional $2 billion on European natural gas in the first nine months of 2022. As a result, the company just announced plans to downsize its European operations permanently. To achieve this objective, the company intends to reduce business operations by 10% annually, or about $500 million, through 2024. This includes job cuts in its “non-production” sectors (i.e., IT, communications, and research and development).

With businesses and industries all over the continent reeling, and with high energy prices contributing to a potential recession, it begs the question: How did Europe get in this situation in the first place?

While Russia’s invasion of Ukraine undoubtedly contributed to Europe’s current energy nightmare, the reality is that the European Union has been instituting policies for quite some time that have left the region energy vulnerable.

During the past decade alone, Europe has cut its domestic natural gas production in half, relying on imports, chiefly from Russia, to fulfill 80% of its total gas needs. At the same time, countries across the EU have committed to phasing out coal and nuclear energy.

The result of these centrally managed policy decisions has been a weakened energy infrastructure, unfit to adequately or efficiently respond to shocks like Russia’s invasion of Ukraine and subsequent gas supply restriction.

As a major Heritage Foundation report notes, “The result of such a politically designed and centrally regulated energy sector [like Europe’s] is a more fragile system where points of failure, instead of being an inconvenience, are catastrophic.”

For Europe, the current energy crisis is teetering on that ledge. The result of the EU’s centrally-managed approach has been a series of layoffs and cutbacks, and high prices have led European families to switch off appliances and stockpile firewood to cut down on energy costs.

Countries are scrambling for short-term relief. But while reopening shuttered coal plants and filling gas storage facilities to capacity may offer some momentary reprieve, it does not shield the continent in the long term.

Rather than committing to ban the sale of gas-powered vehicles by 2035 or to finance new wind turbines and solar parks, the EU should refrain from centrally managing Europe’s energy economy. Instead, European politicians should focus on fostering a market environment that allows a diverse and resilient energy economy to emerge.

Europe cannot continue a policy of restriction. What the continent needs is to adopt policies that open energy markets and promote energy abundance. That is the only way to secure Europe’s energy and economic future.