DOJ: Attacks on Pro-Life Pregnancy Centers ‘Can Be Prosecuted’ 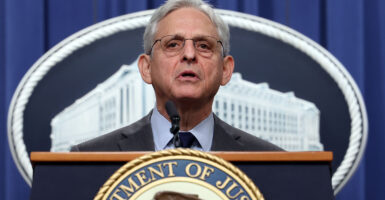 The Department of Justice told a United States Conference of Catholic Bishops committee that attacks on pro-life pregnancy resource centers can be prosecuted under the Freedom of Access to Clinic Entrances (FACE) Act, according to an email obtained by The Daily Signal.

The revelation is significant as the Justice Department faces intense criticism for failing to prosecute those who vandalized, attacked, or firebombed pregnancy resource centers and churches (according to Catholic Vote trackers, at least 86 Catholic churches and 74 pregnancy resource centers and other pro-life organizations have been attacked since the May leak of the draft Supreme Court opinion overturning Roe v. Wade).

Until now, it was unclear whether the Justice Department intended to prosecute any of these attacks under the FACE Act.

“The U.S. Department of Justice (DOJ) has a task force dedicated to enforcing the FACE Act,” Grenchik said. “Recently, the director of the task force reached out to the USCCB regarding the ongoing attacks on pregnancy resource centers.”

The Daily Signal has repeatedly asked the Justice Department to specify the number of pro-abortion attacks on pro-life groups or churches that it intends to prosecute under the FACE Act. The DOJ has refused to divulge this information, though it has charged 26 pro-life individuals with FACE Act violations since the beginning of the year.

The FACE Act has typically been used to prosecute those accused of attacking abortion clinics, but its language also protects pro-life organizations under the term “reproductive health services,” as Grenchik pointed out.

In his email, Grenchik specifically referred to the slogan, “If abortions aren’t safe, then neither are you,” which has been repeatedly spray-painted on the walls of pregnancy resource centers since the Dobbs v. Jackson Women’s Health Organization leak, often accompanied by the spray-painted phrase “Jane’s Revenge.”

“When asked if one of the more typical forms of these attacks—graffiti bearing the phrase ‘If abortions aren’t safe, then neither are you’—could be prosecuted under the FACE Act, he said that such an attack could constitute a FACE Act offense, and that he is hopeful that DOJ could bring charges in many of those cases,” Grenchik added.

The USCCB and the Justice Department did not immediately respond to requests for comment from The Daily Signal.