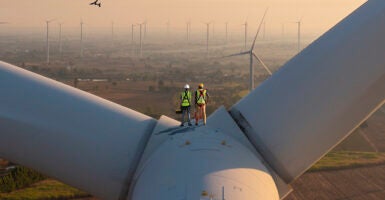 Guillermo Gonzalez is an astronomer and research scientist who writes in the areas of astrobiology, intelligent design, and stellar spectroscopy. He also co-authored "The Privileged Planet: How our Place in the Cosmos is Designed for Discovery."

Many Western countries are enacting policies to rapidly transition away from fossil fuels (coal, natural gas, and oil) to less reliable and costly “green” energy sources (mostly wind and solar) while ignoring the critical benefits that hydrocarbons provide.

It is no exaggeration to say that the wide availability of fossil fuels almost exclusively resulted in the steep rise in the standard of living over the 20th century and into the 21st century. People live longer, are safer from extreme weather events, eat more, travel farther and faster, have more leisure time, drink cleaner water and breathe cleaner air, and produce more goods and services.

Take crude oil, for example. Not only are fuels derived from crude oil ideal for various forms of transportation, but we make thousands of products from it.

And while other energy sources have been developed over the same time period, fossil fuels as a whole still provide about 80% of the energy people use worldwide.

Only some extraordinarily dangerous risk from the continued use of fossil fuels could possibly justify abandoning them. So, should we just trust the ruling class’ war on fossil fuels and accept the suffering that will inevitably come? After all, these are complex issues involving climate and economic models and new and emerging energy technologies. How can the average citizen wade through all the data to decide?

Any policy decisions about climate change and fossil fuels must be based on comparing risks and benefits. But when it comes to supposedly human-caused climate change (specifically, greenhouse gas warming), official statements from governments and international agencies such as the U.N.’s Intergovernmental Panel on Climate Change do not consider the incredible benefits of fossil fuels. It’s no wonder so many people believe that our greenhouse gas emissions only present risks.

These risks supposedly include increased hurricanes, tornadoes, heat waves, droughts, forest fires, and rapidly rising sea levels, among others. What’s more, alarmists claim the rising temperature will soon reach a climate tipping point, beyond which it all gets rapidly much worse and Earth becomes uninhabitable.

It’s surprisingly easy to disprove these claims, and you don’t necessarily have to be an expert. This makes me wonder how so many educated people can be so spectacularly wrong, but that is a topic for another day.

In disproving the claims, there’s no need to focus on personalities or dueling authorities. There are certain key findings that cut through the fog. The only tools you need are a basic understanding of trends and knowing how to spot misleading data.

For example, contrary to what most news outlets have claimed recently following Hurricane Ian, hurricanes making landfall in the U.S. have not increased in number or frequency since reliable records began being kept in 1851. Neither have they increased globally. Moreover, strong tornadoes in the U.S. have decreased significantly since 1954.

What was the worst decade for heat waves in the last 120 years? Would you have guessed the 1930s? And would you be surprised to learn that climate change has not worsened forest fires in the U.S.?

The average global temperature has risen by a little over 1 degree Celsius (about 2 degrees Fahrenheit) since the late 19th century. No one disputes this. Since 1980, it has been rising 0.16 Celsius per decade on average.

How much of this warming is man-made and how much is natural? In short, climatologists compare models that include human effects on the climate with what has happened in the real world.

This is where expertise helps. But you don’t need to be a climatologist to know if the models match reality. In fact, the models have been running much hotter than the actual temperature in recent decades both globally and for the U.S. This implies that the climate models overestimate the human contribution to global warming.

Still, what if we are headed toward a tipping point, albeit more slowly than thought? This concern might be more believable if we were living in unprecedented times. But paleoclimatology research shows that the current temperature, if anything, is on the cool side relative to the whole Holocene period (the period since the end of the last ice age). Since Earth didn’t encounter a tipping point when it was warmer, then it is extremely unlikely it will encounter one any time soon.

Even if the risks of fossil fuels use outweighed their benefits, we still need to know if it is even possible to replace them. It’s surprising that this question is not asked more often. Certainly, the ruling class believes it is possible. But the facts say otherwise.

First, consider that although fossil fuels are burned to generate heat and are often converted into other forms of energy such as electricity, they are also used to make many products we use every day.

Oil is especially versatile. Only 45% of U.S. oil consumption actually goes toward making gasoline and 9% is used to make jet fuel. About 25% is for products ranging from solar panels, wind generators, and asphalt to tires, plastics, and waxes.

It is also very unlikely that jets, merchant ships, or large trucks will ever run on batteries. There are currently no substitutes for oil-derived products in the quantities required to operate these larger vehicles.

In short, we will still need fossil fuels. Almost all aspects of our daily lives depend on them.

Second, are there even enough raw materials to build all the wind turbines, solar panels, and electric vehicles needed for a fossil fuel-free world? These new technologies require more mineral resources than our current fossil fuel-based energy infrastructure.

In addition to the common metals, electric vehicles require lithium, nickel, cobalt, copper, rare earths, manganese, and zinc. Studies are already showing that the projected supply of some of these minerals for the transition to a fossil fuel-free world would fall far short of what’s needed.

The prices of these key minerals will continue to rise steeply, having the consequence of increasing the costs of not only electric vehicles, but of all the other products that employ them, including laptops, phones, copper pipes, and more.

Third, if we want to preserve the environment, isn’t it better to obtain energy resources from the deep dead zones of the Earth rather than from the delicate veneer of life at its surface? Or is it better to mow down the wild forests to grow crops to make biofuels and strip mine the minerals needed for the green transition? Lithium mining is hazardous to the environment, as is cobalt mining.

Should we go back to the bad old days before whale oil, fuel wood, and rubber trees were replaced by kerosene, coal, and petroleum products, respectively?

For believers, this is a sign of God’s providence in creating a world that provides for our needs even as the population grows.