Marxists’ ‘Race Struggle’ May Be About to Implode 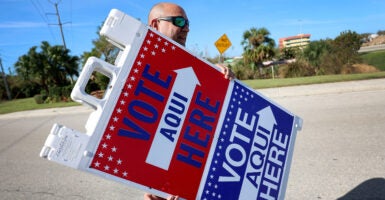 Sometime about half a century ago, the Marxist Left, determined to force a revolution, came up with what it thought was a fail-proof strategy: Get minorities to believe they are victims, a people oppressed by U.S. society, and they will gladly enlist in the campaign to transform society’s culture completely.

This followed the failure of Marxists to foment “class struggle” in the United States. It turned out the American worker had zero interest in revolution. So, the new revolutionary agents would be minorities.

But guess what? Five decades later, Marxists’ “race struggle” may be about to implode in the exact same way as its attempt at a “class struggle,” as the new conscripts reject their prescribed victim status and desert the barricades.

Indeed, Hispanics are, in perhaps massive numbers, saying “adios” to the race war. According to Politico, the lead the Democratic Party had enjoyed over Republicans with these voters has been cut in half in just 10 years.

That would mean that Hispanics, already 14% of the electorate and the fastest-growing segment, may be about to help catapult to power newly reinvigorated conservatives who are aggressively intent not just on conserving existing American traditions, but on rolling back leftist gains.

Why is all this happening? It’s complicated, and no one knows what will happen during the midterm elections on Nov. 8. Yet, according to a Bienvenido poll of 1,200 Hispanic registered voters released just last week, 70% of Hispanics reject the offensive notion that they are victims in America.

MSNBC host Tiffany Cross suggested on Oct. 3 that Hispanics’ revolt against leftism can be traced back to the fact that they’re not really “voices of color.” Cross’ colleague Joy Reid was so discomfited by the news about DeSantis that she barfed up this tweet:

The Atlantic’s Jemele Hill’s tweet on the matter was, however, the most apt, as it pointed directly to the ideological indoctrination at the base of this entire approach.

The belief that workers had “false consciousness”—that they consented to their own oppression by adopting the worldview, or “hegemonic narrative,” of their oppressors—was one of the reasons neo-Marxists threw them overboard during the rise of the New Left in the 1960s.

“False consciousness has become the general consciousness,” lamented the Frankfurt School’s Herbert Marcuse, known as the “guru of the New Left,” in 1969.

Still, Marcuse was hopeful. Revolution would come from what he called “the ghetto population.” Marxist intellectuals had to take a hand in it, of course. “The small and powerless minorities, which struggle against the false consciousness and its beneficiaries, must be helped,” Marcuse added.

It was around this time that activists intimidated an initially reluctant bureaucracy into creating a separate Hispanic category, which finally it did in 1977. Since then, millions of dollars have been spent on grievance-stoking with this group.

A lot of it has been taxpayer money. A new “Latino exhibit” at the Smithsonian National Museum of American History, for example, presents a uniquely Marxist view of reality, portraying Latinos as an oppressed people engaged in a struggle against white supremacy. Worse still, the disgraceful exhibition is a harbinger of a new National Museum of the American Latino, which some well-intentioned Republicans were hoodwinked into helping to create.

Conservatives must obviously realize what time it is. They can no longer contribute to the dismantling of society by supporting such dangerous projects. In fact, they must actively work to eliminate them.

They can start by voting to defund this monstrosity of a museum. The Latino museum’s backers got approximately $8.3 million for fiscal year 2022, and now, they’re back requesting an increase of $2 million, or $10.4 million in total, in the fiscal year 2023 government funding bill, which will be voted on in December. Conservatives must insist on taking out this line.

Then, let’s see what happens in November. New congressional leadership and new members of Congress, including Hispanic members and those elected with Hispanic votes, may smell the coffee, realize what the race struggle of the past 60 years has been all about, and act accordingly.

This column first appeared at The Washington Examiner.