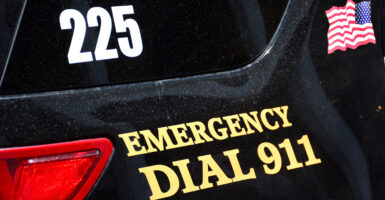 First responders heroically put their lives on the line and rush toward danger every day to keep us safe. They deserve our gratitude, not scorn. Pictured: A Santa Fe, New Mexico, police car is marked with "Emergency Dial 911" on its side. (Photo: Robert Alexander/Getty Images)

Today, Oct. 28, is National First Responders Day. As respect for law enforcement, firefighters, and other emergency services personnel continually spirals downward and as lies spread about them, the truth about their professionalism, compassion, and sacrifices matters more than ever.

Once upon a time, first responders were widely respected and supported. Now, shamefully, they are all too often treated with contempt.

We are all far too familiar with the long list of lies and smear campaigns, especially those targeting law enforcement professionals.

As a recent example, let’s not forget the hateful, debunked narrative about the supposed “whipping” of illegal immigrants pushed by the Biden administration at the expense of innocent Customs and Border Protection agents.

So how about the truth, for a change?

First responders heroically put their lives on the line and rush toward danger every day to keep us safe. They save lives. They prevent violent crimes. They invest in and protect their communities. And there are so many stories and examples that they are impossible to track comprehensively.

This year is not shaping up to be much better. In midyear 2022 statistics, there were notable increases in some important line-of-duty death categories. In the first half of this year, compared with the same time period in 2021, there was an 18% increase in firearms-related fatalities (after a 38% increase from 2020 to 2021). So far in 2022, 57 law enforcement officers have been killed by gunfire (four of which were “inadvertent”), and 13 have been killed by vehicles (10 of which were vehicular assault).

The Centers for Disease Control and Prevention says that first responders’ rate of occupational injury is significantly higher than those in other professions. And some research indicates that police and firefighters are at an even higher risk of suicide and mental health issues than of line-of-duty deaths.

In addition to tragic occupational hazards and line-of-duty deaths, law enforcement officers and other first responders are regularly intentionally injured, attacked, and targeted during their day-to-day duties.

And it’s not just police who are targeted. Firefighters and others in emergency-response professions are attacked while simply doing their jobs.

First responders willingly subject themselves to risks to keep others, their communities, and the nation safe.

People simply want to feel that safety in their communities, and when allowed to do so, first responders provide it.

The Left has sent them away, making Americans vulnerable and too often victims of crimes that shouldn’t be occurring at all because the Left pushes for defunding the police in combination with no cash bail policies, encouraging rogue prosecutors to release repeat criminals who quickly reoffend.

Today, while the elite retain their own personal security, taxpayers who fund community protection and desire first-responder presence too often go without it.

Despite the vitriol and increase in crime and amid the defunding and demoralization of first responders across the country, they continue to serve as best they can.

Rather than stoking the flames of division and violence, our government, politicians, institutions, and media should be unashamedly supportive of law enforcement and emergency services personnel. Public servants’ honorable sacrifices should demand a high level of respect and appreciation. And the way we talk about them, portray them, and teach our children about them matters.

The truth is of the utmost importance when real people’s reputations and families’ livelihoods are at stake.

To each first responder, thank you. You may not always be able to hear those words over the noise, but you are truly appreciated, supported, and respected by many Americans today on National First Responders Day—and every other day.