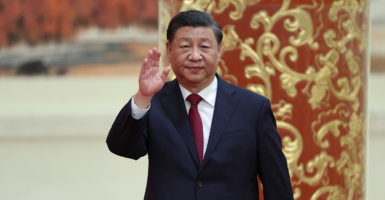 The Pentagon must “act urgently to sustain and strengthen U.S. deterrence" of China, the National Defense Strategy says. Pictured: Chinese President Xi Jinping greets the crowd Sunday during a meeting at the Great Hall of the People in Beijing. (Photo: Lintao Zhang/Getty Images)

The Pentagon identifies China as the No. 1 threat to U.S. national security in the latest version of the National Defense Strategy, released just days after the leader of the communist regime secured a third five-year term.

“The key theme … is the need to sustain and strengthen U.S. deterrence with the People’s Republic of China as our pacing challenge,” Defense Secretary Lloyd Austin said Thursday during a press conference on the new document.

Austin noted that President Joe Biden’s National Security Strategy, released earlier this month, describes China as, in the defense secretary’s words, “the only competitor out there with both the intent to reshape the international order and increasingly the power to do so.”

“The third term was not a surprise at all, [but] the extent to which he consolidated his power was,” Michael Cunningham, a research fellow on China in The Heritage Foundation’s Asian Studies Center, said of Xi’s leadership of the Chinese Communist Party. (The Daily Signal is Heritage’s multimedia news organization.)

Xi “managed to get to force people to retire prematurely, who were not his proteges, and to replace them with proteges, his own handpicked people,” Cunningham said. “So now he controls, essentially, the entire Politburo Standing Committee.”

The National Defense Strategy, revised every four years, provides insights into the challenges the U.S. is expected to face in coming years, as well as a plan to address those challenges.

The first National Defense Strategy under the Biden administration also calls on the Defense Department to “act urgently to sustain and strengthen U.S. deterrence” of China.

The most comprehensive and serious challenge to U.S. national security is [China’s] coercive and increasingly aggressive endeavor to refashion the Indo-Pacific region and the international system to suit its interests and authoritarian preferences.

[China] seeks to undermine U.S. alliances and security partnerships in the Indo-Pacific region, and leverage its growing capabilities, including its economic influence and the People’s Liberation Army’s growing strength and military footprint, to coerce its neighbors and threaten their interests.

Tom Spoehr, a retired Army lieutenant general who directs the Center for National Defense at The Heritage Foundation, criticized the new National Defense Strategy for “lacking on details how the U.S. will deter Chinese aggression, particularly an invasion of Taiwan.”

“While calling for additional ‘asymmetric’ weapons, the strategy says nothing about the pressing need to increase the size of the U.S. Navy and Air Forces to counter China’s growing capacity for military operations,” Spoehr told The Daily Signal. “The strategy is similarly silent on the subject of increasing our stockpiles of precision weapons, a need which the Ukraine conflict has brought into sharp focus.”

The new strategy notes that China’s aggressive activity and rhetoric toward Taiwan “are destabilizing, risk miscalculation, and threaten the peace and stability of the Taiwan Strait,” which are part of China’s larger “pattern of [destabilization and coercion]” in the South China and East China seas and along the Line of Actual Control.

The Line of Actual Control, as CNN reported, is an “inhospitable piece of land where the disputed border between India and China is roughly demarcated.”

The People’s Liberation Army, China’s main military force and the armed wing of the Chinese Communist Party, has been “expanded and modernized” with the intent of undermining U.S. military advantages, the report says.

The Pentagon’s strategy also notes that China’s military has swiftly advanced and integrated its “space, counterspace, cyber, electronic, and informational warfare capabilities to support its holistic approach to joint warfare.”

In addressing threats to the U.S. homeland, the National Defense Strategy highlights that both China and Russia “now pose more dangerous challenges to safety and security at home, even as terrorist threats persist.” The strategy says:

Both states are already using non-kinetic means against our defense industrial base and mobilization systems, as well as deploying counterspace capabilities that can target our Global Positioning System and other space-based capabilities that support military power and daily civilian life.

[China] or Russia could use a wide array of tools in an attempt to hinder U.S. military preparation and response in a conflict, including actions aimed at undermining the will of the U.S. public, and to target our critical infrastructure and other systems.

“North Korea continues to expand its nuclear and missile capability to threaten the U.S. homeland, deployed U.S. forces, and [South Korea] and Japan, while seeking to drive wedges between the [U.S.-South Korea] and United States-Japan alliances,” the strategy warns.

Iran, the strategy says, “is taking actions that would improve its ability to produce a nuclear weapon should it make the decision to do so, even as it builds and exports extensive missile forces, uncrewed aircraft systems, and advanced maritime capabilities that threaten chokepoints for the free flow of energy resources and international commerce.”

In the same vein, Iran undercuts stability in the Middle East with its support of “terrorist groups and military proxies, employing its own paramilitary forces, engaging in military provocations, and conducting malicious cyber and information operations,” the strategy says.

It adds: “Global terrorist groups—including [al-Qaeda], Islamic State in Iraq and Syria (ISIS), and their affiliates—have had their capabilities degraded, but some may be able to reconstitute them in short order, which will require monitoring indications and warning against the [violent extremist organizations’] threat.”

Defense Department priorities, according to the strategy, include:

Heritage’s Spoehr also said the National Defense Strategy fails to address “the biggest recruiting crisis” since the start of the nation’s all-volunteer force, in which the Army must “cut its end strength below what is needed.”

Spoehr argued that the Pentagon’s strategy “says nothing about how it will bring new thinking to the challenge of attracting young volunteers.”

“Further disappointing,” he said, “is that even though [China] has embarked on what has been referred to as a ‘breathtaking’ expansion of its nuclear weapons stockpile, there is nothing in either the National Defense Strategy or the accompanying Nuclear Posture Review to describe how the administration plans to deal with these new developments—other than to continue the status quo.”

The Defense Department did not immediately respond to The Daily Signal’s request for comment.