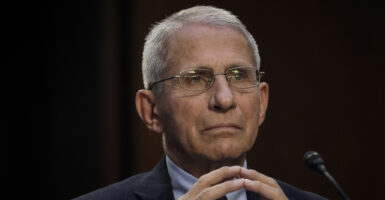 Deferring to public health officials, school administrators, and teachers unions over school closures during the pandemic took a perhaps incalculable toll on the education of America's young people. Pictured: Dr. Anthony Fauci, director of the National Institute of Allergy and Infectious Diseases, testifies Sept. 14 during a Senate committee hearing on the federal response to monkeypox. (Photo: Drew Angerer/Getty Images)

Why didn’t anyone say school closures would be bad?

That’s the question some of our enlightened media experts are asking right now. Yes, really.

“I have to say I’m surprised that there hasn’t been a national conversation about the damage done to kids because of these school closures and the virtual learning and everything,” CNN host Jake Tapper said Friday.

Plenty of Americans quietly and not so quietly had their figurative hands up in class on this issue when the COVID-19 pandemic started. They not only were ignored by Tapper and his media cohorts, but in many cases were ridiculed and demonized.

Now Tapper is calling for a “bipartisan movement” to address the problem. The implication is that a national conversation in America really counts only if Democrats and the Left are conducting it, not those icky conservative types.

The reality is that deferring to public health officials, school administrators, and teachers unions over school closures took a perhaps incalculable toll on the education of young people in America. Dissenters were shoved aside and dismissed.

It’s clear that was a massive mistake that we are paying for now.

The hard data is rolling in and it paints an ugly picture of declining test scores in reading and math and lost academic years. Maybe Tapper and company should have listened to the “national conversation” happening years ago.

To almost nobody’s surprise, the recently released National Assessment of Educational Progress—a kind of report card on the country’s K-12 schools—showed a catastrophic decline in math and reading scores since 2019.

The decline in math scores was the largest in over 30 years. And it’s not like things were going great before the pandemic.

Lindsey Burke, director of The Heritage Foundation’s Center for Education Policy, broke down the bad news in a Daily Signal commentary. (The Daily Signal is Heritage’s multimedia news organization.)

However, as she explained, lockdowns and remote learning are only part of the story in American education since 2019:

[D]eclines in test scores are most likely a combination of bad policies: school closures induced by teachers unions that require emergency remote instruction plus special interest groups’ preoccupation with radical gender ideology and critical race theory during this crisis.

Not only did schools frequently get shut down and slip into long-term remote learning, but students also were force-fed curriculum geared toward radical social change rather than academic excellence. “Woke” math and other absurdities began to pop up in school districts around the country—even in red states where lockdowns were less common.

School administrators often were more concerned with changing the name of a school rather than ensuring that students would receive an excellent education, or really any education at all.

We were told to accept this whether we liked it or not. Educrats and teachers unions know best, little children.

No wonder there was a massive parent revolt.

This brings up the point of the “national conversation” and the troubling direction of our institutions and republic.

The reality is, many Americans were deeply concerned about the implications of a long-term lockdown. Yes, the pandemic was serious. But the cost of addressing it was also quite serious. There were considerable individual and societywide decisions to be made that couldn’t be answered by “science” or a team of experts.

Yet, that’s often how the conversation went.

The problem we have now is that faith in institutions has collapsed. In many cases, rightly so. Scientific expertise is no substitute for debate and deliberation, yet it was treated as such by countless politicians. To make matters worse, many of the insiders and experts revealed themselves as more dedicated to ideology than public health, medicine, or science.

Remember when we all had to engage in extreme lockdowns, but Black Lives Matter mass protests were OK with the “experts” because racism is a pandemic? For many, that was when the Rubicon of trust had been crossed.

But perhaps, like in ancient Rome, the seeds of the republic’s demise had been set in motion long before. The pandemic simply revealed the warped nature of our system and departure from our founding principles.

This is the crisis Florida Gov. Ron DeSantis frequently points to, citing Dwight Eisenhower’s presidential farewell address in January 1961. The speech is frequently remembered for Ike’s warnings about the military-industrial complex. Eisenhower also warned about a growing “scientific-technological elite” that would pervert both genuine science and public policy.

A federally funded and tightly interwoven system of science and research—such as what developed in the United States in the 20th century—made the industry susceptible to being captured by an elite clique and molded by powerful insiders rather than open-minded scientists and the ordinary Americans it was meant to serve.

Eisenhower was not dismissing science, far from it.

The two-term president, former Army general, and World War II hero instead was telling the American people that the nature of scientific institutions, suddenly bound to the government and large bureaucracies, meant that responsible elected leaders should be more engaged. They should consider the needs of society as a whole, rather than just the opinions of insiders.

“It is the task of statesmanship to mold, to balance, and to integrate these and other forces, new and old, within the principles of our democratic system—ever aiming toward the supreme goals of our free society,” Eisenhower concluded.

During the COVID-19 pandemic, it seems few politicians took Eisenhower’s advice. DeSantis did, which is why Florida, by many measures, emerged from the crisis better than others.

Unfortunately, most other politicians tamely or even proudly deferred to the “scientific-technological elite,” represented by people such as the National Institutes of Health’s Dr. Anthony Fauci and powerful political insiders such as Randi Weingarten, head of the American Federation of Teachers, the country’s second-largest teachers union.

Weingarten, naturally, was a fervent proponent of both extreme lockdowns and woke nonsense in curriculum.

This was done in the name of “science” and expertise, but it sidestepped the proper place where an actual discussion should have been had. Not just a national one, but a state and local one too.

That’s the point of living in a federal republic such as ours. It’s why we’ve succeeded when others have failed and why we’ve often corrected mistakes that all people inevitably make.

As the disastrous K-12 test scores reveal, we’re now paying a terrible price for deferring our big decisions to the “scientific-technological elite,” who turned out to be neither elite nor solely motivated by science.

This country was founded on the idea that we, the people, should rule, not a little intellectual elite in a far-off place or a pseudo-scientific, woke managerial clerisy embedded in a vast bureaucracy. The failures of the past few years should remind us of that.