Why Are Feds Still Funding EcoHealth Alliance When Its COVID-19 Role Remains Unresolved? 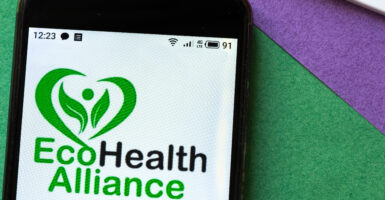 The world is trying to recover from COVID-19, the worst pandemic since the 1918 Spanish flu, and a lot of questions remain concerning the origins of the virus and the role of U.S. taxpayer-funded research in China.

Nonetheless, the National Institutes of Health recently awarded $650,000 to EcoHealth Alliance, the nongovernmental organization that’s at the center of a major and unresolved international controversy.

There’s still disagreement among scientists over the issue of whether the pandemic may have originated from a lab leak. A recent research paper concluded, however, that there was a “high likelihood that SARS-CoV-2 may have originated as an infectious clone assembled in vitro”—that is, in a laboratory.

What is not controversial is that EcoHealth Alliance is the NGO that funded coronavirus research at China’s Wuhan Institute of Virology, a research facility known to have been engaged in “gain of function” research designed to replicate a virus to increase its virulence and transmissibility to humans.

EcoHealth Alliance and the man who runs it, Dr. Peter Daszak, a British zoologist who has emerged as a central figure in the gain-of-function controversy and the origins of COVID-19, has been a target of recent congressional inquiries.

Yet, once again, the NIH awarded the NGO another grant to be administered by—you guessed it—the National Institute of Allergy and Infectious Diseases, the NIH agency run by Dr. Anthony Fauci.

Previously, the recipient of millions of taxpayer dollars courtesy of the NIH, EcoHealth Alliance’s latest grant award is to study the “potential” for the emergence of new Asian bat coronaviruses in the South China border regions and Southeast Asia for the purpose of detecting and preventing another major coronavirus pandemic.

A noble goal, of course, but one that could doubtlessly be pursued by a top-flight, biomedical research lab with a far better track record, less controversy, and fewer unanswered questions.

EcoHealth should not receive a penny of American taxpayer dollars for their gross mismanagement of Americans’ hard-earned money.

For his part, Fauci has repeatedly denied that American taxpayer dollars were used in Communist China’s gain-of-function coronavirus research. Members of Congress rightly remain skeptical of that claim, and the precise details of the role of EcoHealth Alliance and the Chinese origins of COVID-19 are still an unresolved issue.

In a joint April 19 press statement, Comer and Rep. Steve Scalise, R-La., outlined the reasons why EcoHealth should be the target of a more thorough investigation:

In 2014, NIH awarded EcoHealth a $3.7 million grant to study bat coronaviruses. As early as 2016, EcoHealth and Dr. Daszak fell out of compliance with the grant terms when they failed to timely file an annual report.

When they did file the report, it was clear that EcoHealth in collaboration with the Wuhan Institute of Virology had engaged in gain-of-function research in violation of the federal moratorium.

Dr. Daszak argued and bullied NIH into accepting his own definition of gain of function, shielded his work from NIH, and supported the [Wuhan Institute of Virology’s] decision to take down their online database of virus sequences.

In 2021, Dr. Lawrence Tabak, principal deputy director of the NIH, reported that Daszak and his team failed to report on a critical experiment with mice as required by the terms of their NIH grant.

In a remarkable Oct. 20, 2021, letter to Comer, Tabak acknowledged that there was indeed a “limited experiment” and that the research was “testing if spike proteins from naturally occurring bat coronaviruses circulating in China were capable of binding to the human ACE2 receptor in a mouse model.”

In that experiment, the mice got sicker than the mice infected with the bat coronavirus.

The fact that the experimental mice got sicker is not, and was not, in dispute. Instead, the heated dispute between Fauci and other NIH officials with Sen. Rand Paul, R-Ky., and other members of Congress centered on the precise definition of gain-of-function research as applied to the activities of the Wuhan lab.

In his Oct. 20, 2021, letter, Tabak continued, “The research plan was reviewed by NIH in advance of funding, and NIH determined that it did not fit the definition of research involving enhanced pathogens of pandemic potential because the bat coronaviruses had not been shown to infect humans.”

Curiously, the NIH removed its definition of gain-of-function research the very same day (Oct. 20) that Tabak responded to Comer. The NIH had previously defined gain of function as “a type of research that modifies a biological agent so that it confers new or enhanced activity to that agent.”

The lab work to create a more virulent strain to sicken mice did indeed fit that definition.

Despite these definitional changes, the origins question remains the crux of the matter.

President Joe Biden declared in August 2021: “We must have a full and transparent accounting of this global tragedy. Nothing less is acceptable.”  Communist China has been uncooperative, and a U.S. intelligence report on the origins of COVID-19 was inconclusive.

Circumstantially, the grant funding from EcoHealth Alliance may have contributed to the gain-of-function research that was ongoing at the Wuhan Institute of Virology.

According to an unclassified April 2020 State Department memorandum, Shi Zheng Li, the key Wuhan researcher on bat coronaviruses, was paid from the grant money. Shi, dubbed “the Bat Lady,” in the language of the memo, “conducted genetic engineering of bat virus to make it easily transmissible to humans.”

This case is far from closed. Congressional investigators must take a deep dive and settle this question.

In the meantime, Comer is right: EcoHealth Alliance should not get another red cent of taxpayers’ money.