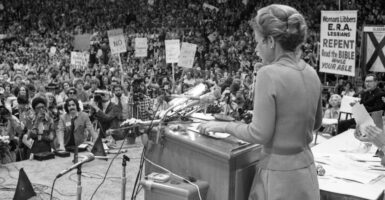 A judge blocked the Department of Justice's subpoena seeking materials from Eagle Forum's Alabama chapter. Pictured: Phyllis Schlafly, founder of Eagle Forum, speaks to a rally of 10,000 opponents of the National Women's Conference at a "family day" rally at the Astro Arena. (Photo: Bettmann Archive/Getty Images)

A federal judge quashed a Justice Department subpoena going after the communications of a private conservative group in Alabama.

The Justice Department sued the state of Alabama opposing the Vulnerable Child Compassion and Protection Act, and in the course of discovery sought all information from Eagle Forum Alabama regarding its advocacy for the bill going back to 2017.

Eagle Forum is not a party in the lawsuit, prompting the court to rule that the DOJ was overreaching.

On Monday, U.S. District Judge Liles Burke, of the Middle District of Alabama, issued an opinion stating, “Considering the relevance (or lack thereof) of the requested material, the burden of production, the nonparties’ resources, and the government’s own conduct, the Court finds that the subpoenas exceed the scope of discovery.”

The Justice Department issued the subpoena in August and last month, Eagle Forum Alabama filed the motion to quash.

Several Republican members of Congress, the Alabama Legislature, and conservative organizations filed a brief with the court arguing on the side of Eagle Forum Alabama.

The Vulnerable Child Compassion and Protection Act, which bans the distribution of puberty-blocking medication and cross-sex hormones to minors, along with the performing of transgender surgeries on minors, became effective in May after large majorities in both houses of the Legislature approved the bill.

The Alabama chapter of the American Civil Liberties Union, representing parents of kids who claim to identify as transgender, filed suit against the law in late April, and the Justice Department joined as an intervener party in the lawsuit.

“Eagle Forum’s triumph today is a victory for freedom of speech for all Americans who wish to be a part of the democratic process,” Kristen A. Ullman, president of Eagle Forum, said in a statement Tuesday. Conservative icon Phyllis Schlafly founded the national Eagle Forum, which has multiple state chapters.

“We successfully defended the rights of private citizens and non-profits to engage in the legislative process when their viewpoint differs from that of the government,” Ullman continued. “DOJ ardently fought to harass a volunteer group of concerned citizens and should take their loss today as a reminder they have awakened a sleeping giant. The Court made clear that the government’s attempt to silence voices with which it disagrees by demanding irrelevant materials will not be allowed.”

This is a breaking news story and will be updated.