‘Bolder and More Confident’: What to Expect for Xi Jinping’s Third Term 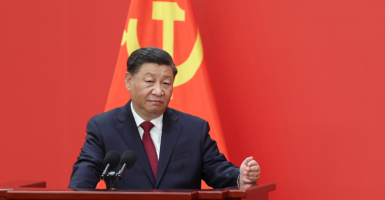 "The U.S.-China relationship will probably become even more tense in the coming years," Michael Cunningham says. Pictured: Chinese President Xi Jinping speaks at the podium during the meeting between members of the Standing Committee of the Political Bureau of the 20th CPC Central Committee and Chinese and foreign journalists at the Great Hall of People on Oct. 23, 2022, in Beijing. (Photo: Lintao Zhang/Getty Images)

Asia experts are sounding the alarm over what the world can expect during Chinese President Xi Jinping’s next five years in office after the Communist Party’s leader secured a third term in Beijing on Sunday.

“We can expect the trajectory of the past 10 years to continue, except that Xi will be even bolder and more confident. The U.S.-China relationship will probably become even more tense in the coming years,” Michael Cunningham, whose research in The Heritage Foundation’s Asian Studies Center focuses on China, told The Daily Signal on Monday. (The Daily Signal is Heritage’s multimedia news organization.)

“Xi’s more explicit challenge to U.S. global influence and to the international system, and his attempts to expand China’s international influence, especially in the developing world, will continue,” said Cunningham.

The abrasive ‘wolf warrior’ style diplomacy likely will continue to be a feature of China’s foreign policy. The one silver lining to all of this is that Xi’s more aggressive approach to domestic governance and foreign policy will continue to alienate its neighbors and peers and offer opportunities for the U.S. to build coalitions of like-minded countries.

Members of the Politburo Standing Committee include previous members Wang Huning and Zhao Leji; Li Qiang, who was given the No. 2 spot in the committee and is expected to become premier in March; and new members Cai Qi, Li Xi, and Ding Xuexiang, Reuters reported.

“Xi Jinping, who will now not have to deal with opposing views, is going to take China into an even darker era. It’s time for us to get ready for what Xi last Sunday [Oct. 16] called ‘dangerous storms,’” Gordon Chang, the author of “The Great U.S.-China Tech War,” said in a tweet.

Richard McGregor, a senior fellow at the Lowy Institute in Sydney, told Reuters, “All of [Xi’s] rivals, potential and real, have been forced out of the Politburo Standing Committee and Xi loyalists took their place.”

“The new Politburo is an emphatic statement of Xi’s dominance over the party,” McGregor added.

“Power will be even more concentrated in the hands of Xi Jinping,” Jean-Pierre Cabestan, a Chinese politics expert at Hong Kong Baptist University, told The Associated Press.

“There is no counterweight or checks and balances in the system at all,” Cabestan said.

The Chinese Communist Party also selected its Politburo on Sunday. The 24-member governing body consists of only men—the first time in more than 20 years, according to The Wall Street Journal.

“This suggests Xi is far more interested in consolidating his power base by staffing the Politburo with his protégés and supporters than giving female representation,” Lynette Ong, a China scholar and political science professor at the University of Toronto, told Bloomberg.

The weeklong meeting of the 20th Communist Party Congress, which assembles only twice a decade, ended a day earlier, on Saturday, when more than 2,000 delegates elected a Central Committee of 205 people, 11 of whom were women. The Central Committee is responsible for Chinese policymaking throughout the next five years, Reuters reported.

The new Central Committee includes Foreign Minister Wang Yi, who was appointed to the Politburo Sunday; Huang Kunming, who leads China’s propaganda department and is also a Politburo member; and Yi Huiman, the chairman of the China Securities and Regulatory Commission, CNBC reported.

In remarks on Saturday, Xi reaffirmed that the Chinese Communist Party is “fully confident and capable of creating new and even greater miracles on the new journey of the new era,” according to Xinhua News Agency, the official news agency of the People’s Republic of China.

Xi also told the nearly 2,400 delegates in attendance that the goals of “unifying thinking, fortifying confidence, charting the course, and boosting morale” have been realized by the Communist Party Congress, Xinhua News Agency reported.

“This has been a congress of holding our banner high, pooling our strength, and promoting solidarity and dedication,” Xi said.

The Chinese Communist Party also amended its constitution during the week, which further strengthened Xi’s power.

Specifically, the congress added the “two establishes,” which “call on party members to recognize Xi as the ‘core’ of the party and to regard his governing philosophy as a key tenet of party rule,” and the “two safeguards,” which “require party members to protect Xi’s status as the core and to safeguard the party’s leading role in politics in China,” NPR reported.

The congress also added an amendment relating to Taiwan. Xi is determined to “reunify” Taiwan with China, though the island has never been governed by the Chinese Communist Party.

“Resolutely opposing and deterring separatists seeking ‘Taiwan independence’” was added to the Communist Party’s Constitution, which marks the first time a direct suggestion has been made in the document, the South China Morning Post reported.

Also on Saturday, former Chinese President Hu Jintao, who served prior to Xi’s takeover from 2002 until 2012, was unexpectedly removed from the Great Hall of the People. A video shared on Twitter shows two men escorting Hu from his seat, which was next to Xi’s, offstage.

Hu was “not feeling well during the session” and “his staff, for his health, accompanied him to a room next to the meeting venue for a rest,” according to a now-deleted tweet from Xinhua.

“This was a deliberate attempt to humiliate [Hu] and show Xi is in complete control,” Chang said on “Fox & Friends Weekend.” “That’s a chilling message because Xi Jinping wants to do things that are dangerous, are murderous, malicious.”

“The world has to be extremely concerned about the direction China is going. The committee is packed with Xi’s allies. There is nobody who is of a different view than Xi Jinping,” added Chang.

Xi discussed Taiwan during the opening session for the 20th Communist Party Congress and a “peaceful reunification” between China and Taiwan, a policy goal the leader has been pushing for years.

“Resolving the Taiwan question is a matter for the Chinese, a matter that must be resolved by the Chinese,” Xi said, according to state-owned CCTV.com.

“We will continue to strive for peaceful reunification with the greatest sincerity and the utmost effort, but we will never promise to renounce the use of force, and we reserve the option of taking all measures necessary,” Xi said.

One day after Xi’s comments, U.S. Secretary of State Antony Blinken said China is “determined to pursue reunification on a much faster timeline.”

“Beijing’s high-pressure campaign against Taiwan will continue, and that will remain a dangerous flashpoint in U.S.-China relations. That said, Xi doesn’t want a war he’s not convinced China can win, and Beijing assumes the U.S. and Japan would be involved in any war over Taiwan,” Cunningham said. He continued:

Even with Xi’s consolidation of power, the political costs for him and the party of launching a failed invasion of Taiwan that results in a permanent separation of Taiwan from the mainland would be catastrophic.

Xi will continue to rapidly develop and modernize China’s military in preparation for such a possibility, and Washington must take this threat seriously and ensure that Beijing never feels the power balance has shifted in its favor.