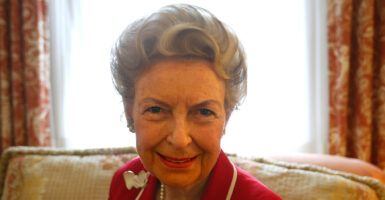 The Justice Department subpoenaed the Alabama chapter of the conservative group Eagle Forum, but was excoriated by a federal judge for how abusively overbroad it was, relative to the group's speaking out in opposition to a case the DOJ is pursuing. Pictured: The now-deceased conservative activist Phyllis Schlafly—seen here in New York on Aug. 31, 2004, for that year's Republican National Convention—founded the Eagle Forum in 1972. (Photo: Alan Hagman/Los Angeles Times/Getty Images)

On Sept. 20, we reported on an outrageous subpoena served by the U.S. Justice Department on the Eagle Forum of Alabama. Fortunately, in the face of vigorous opposition expressed in amicus briefs filed by literally dozens of conservative organizations supporting the Eagle Forum’s motion to quash (i.e., throw out) the subpoena, Justice Department lawyers caved and narrowed their request—as the judge in the case put it—to “1%” of what they were demanding before.

A quick refresher about this case is in order: The usual left-wing advocacy groups and the Biden Justice Department sued Alabama after it passed the Vulnerable Child Compassion and Protection Act, which bans puberty blockers, hormone therapy, and surgery to alter the biological sex of a minor. They claim the law violates the Equal Protection Clause of the 14th Amendment.

Eagle Forum is not a defendant in the lawsuit. It’s a small, nonprofit membership organization with lots of volunteers—ordinary citizens—and two employees, one full-time and one half-time. Its members, who were concerned over this issue, did what all of us have the right to do under the First Amendment. They spoke out, made speeches, organized meetings, and talked to their state legislators.

But because of their advocacy, they were targeted by the Justice Department with a massive, capacious subpoena that sought everything the Eagle Forum and its volunteers have done or said for the last five years on this issue. It was clearly an attempt to intimidate the organization, deter its activism, and perhaps punish them for exercising their First Amendment rights on a policy issue the Biden administration disagreed with.

As we pointed out before, nothing that the Justice Department was demanding had any relevance whatsoever to this lawsuit, since the Eagle Forum is not the legislature that passed this law. Burke himself echoed that point when he asked “how in the world could what the Department of Justice is asking for possibly be relevant to this case and its outcome,” given that the issue is “whether or not this statute is constitutional”?

The judge asked Justice Department lawyer Jason Cheek why the department had suddenly gone from “asking for [an] ‘everything we can think of subpoena’ down to [a] ‘we just really actually one need one thing’” subpoena just before the hearing. The only answer the lawyer was able to squeak out was the “amicus briefs filed by numerous organizations” and his complaint that the Eagle Forum did not first have a “conversation” with the department to negotiate a narrowing of the scope of the subpoena. He repeatedly complained that “this thing has grown some legs” after so many groups filed briefs opposing his subpoena.

In other words, only because there was vigorous opposition to the subpoena by multiple organizations did the Justice Department decide to withdraw its disgraceful subpoena. And that opposition entailed costs and time to not only the Eagle Forum, but the dozens of organizations that came to the Eagle Forum’s defense via amicus briefs.

Furthermore, the lawyer for the Eagle Forum, John Graham, pointed out that the applicable federal court rule on allowable discovery in a court case “imposes no such obligation” on the target to try to negotiate a “deal” with the Justice Department. The rule, as Graham correctly said, requires those “serving a subpoena—the federal government, in this case—to take reasonable steps to avoid imposing undue burden and expense on the recipient of the subpoena, and authorizes sanctions on a party or attorney who fails to comply.”

Added Graham: “Rule 45 leaves no room for a party or attorney to issue an untimely, facially overbroad and unduly burdensome subpoena and expect to work out the details later.”

Here, Justice Department lawyers failed entirely to abide by their ethical and professional duty to ensure that they do not engage in abusive discovery that is burdensome and, as the judge said, “not reasonably calculated to lead to the discovery of admissible evidence.” In fact, the judge noted that the new “narrowed” subpoena wasn’t really narrowed at all, it was asking for new information not even originally requested by the Justice Department.

Burke warned the department about the dire consequences of its misbehavior:

Administrations change every four years, or at least every eight. Is the new standard going to be that these kind of subpoenas go out in legislation to any advocacy organization, and they want emails to their members, they want social media posts, they want things that the group just considered in their advocacy?

… Is that where you think the Department of Justice thinks we need to go in this country? Because I promise you this, at some point this will be aimed at the Southern Poverty Law [Center] and the ACLU, and their efforts, as well. Is this where we need to go?

It is clear that subpoenas like this one are intended to harass those who are on the conservative side of policy debates in order to chill their speech, deter their active participation in the democratic, legislative process, and discourage citizens from contributing to or otherwise affiliating with organizations like the Eagle Forum.

Such abusive discovery threatens the First Amendment rights of membership organizations to engage in free speech, associate with others who share their beliefs, and speak to their elected representatives and other government officials about public policy issues that concern them.

It is lawfare at its worst.

This column first appeared at PJMedia.com.