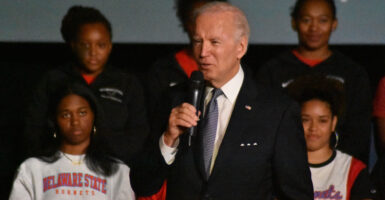 President Joe Biden used his home state of Delaware on Friday to promote his “forgiveness” of student loan debt, which he did through executive action in August rather than through Congress.

Some of Biden’s assertions during 24 minutes of remarks at Delaware State University in Dover were factual, and some less so.

Biden spoke at the event one day after the Supreme Court opted not to immediately block the student loan forgiveness program from going forward, and after a federal judge dismissed a lawsuit by six states to block the plan.

“They’ve been fighting us in the courts,” Biden told the crowd. “But just yesterday, a state court and the Supreme Court said no, we are on Biden’s side.”

However, on Friday, the U.S. Court of Appeals for the 8th Circuit barred the Biden administration temporarily barred from discharging student loan debt while the appeals court weighed the states’ request to halt the bailout.

Here’s a look at the veracity of four of the president’s comments.

Biden told the Delaware crowd that the student debt forgiveness would not help the wealthy.

However, high earners such as doctors and lawyers–who often have the most student loan debt–will be among the largest beneficiaries, according to the Committee for a Responsible Federal Budget, a fiscal watchdog and advocacy group.

Americans with law degrees stand to get an estimated $29,500 in loan “forgiveness,” while those with medical degrees would get an average of $48,500 in debt “cancellation.”

An analysis from University of Pennsylvania’s Wharton School determined that, under the Biden plan, “between 69% and 73% of debt forgiven accrues to households in the top 60% of income distribution.”

Moreover, the Committee for a Responsible Federal Budget estimates that if the Biden policy continues through August 2023, doctors would receive benefits of $89,500 per person and lawyers would get a reduction of $54,500 per person.

“Nearly two-thirds of the benefit of canceling $50,000 in student debt per person would go to the top 40% of households and over three-tenths would go to the top quintile, according to a recent paper by Sylvain Catherine and Constantine Yannelis,” a policy paper from the budget organization says.

Biden told the Delaware audience that Republicans who oppose his plan to “forgive” student loan debt shouldn’t use deficit spending as an excuse for that opposition.

“This morning, my administration announced that this year the federal deficit fell by $1.4 trillion. It follows last year’s historic drop in the deficit of $350 billion,” Biden said. “We’re going to reduce the deficit by another $250 billion over the next decade. … Folks, in just 20 months since I’ve been in office, we’ve cut the deficit in half.”

Biden already has been fact-checked by multiple outlets for claiming deficit reduction.

Factcheck.org reported in April: “President Joe Biden has been misleadingly taking credit for cutting federal deficits by historic amounts, though most of the reduction in deficits is the result of expiring emergency pandemic spending. Deficits fell between fiscal year 2020 and 2021 far less than initially projected after Biden added to them with more emergency pandemic and infrastructure spending.”

Other left-leaning fact-check sites were critical of the president’s claim. The Washington Post’s fact-checker gave Biden three Pinocchios out of a possible four, and PolitiFact ranked his deficit-reduction claims as “half true.”

Moreover, the cost of “forgiving” student loan debt could reach as high as $1 trillion, according to the Wharton School, and cost a minimum of $300 billion.

The Biden administration launched an online portal to allow students to sign up for loan debt forgiveness. But before launching it, officials set up a test site to see how many borrowers would sign up before the official launch.

Biden said Friday that this move was to avoid the kind of problematic launch that the Obamacare portal initially had.

“It’s a plan for people who took out student loans before July of this year. A few days ago, I launched an online application process where you can apply for that debt relief,” Biden said.  “Almost 9 million people signed on.”

“Folks, you have a time limit,” he added. “If you have student debt, you can go to StudentAid.gov.”

That “9 million people” is slightly more than the reported number of “more than 8 million people” who submitted requests for debt relief, according to CNBC, which cites the U.S. Department of Education.

Biden may have more updated numbers, however. But since the application process formally opened Monday, CNBC reported, about 1 million more have signed up.

At another point, Biden said, “The total, more than 40 million Americans stand to benefit from this relief.”

However, The Associated Press reported in August: “More than 40 million Americans could see their student loan debt reduced —and in many cases eliminated—under the long-awaited forgiveness plan President Joe Biden announced”

What’s difficult to fact-check—unless one works in the White House mailroom—is Biden’s assertion that “literally 10,000” Americans with student debt have written him letters of appreciation so far.

4. About Those Pandemic Loans

Biden went on to slam Republicans in Congress who received loan forgiveness as part of the Paycheck Protection Program, a federal effort during the COVID-19 pandemic designed to prevent businesses from closing.

“I don’t want to hear from MAGA Republican officials who had hundreds of thousands of dollars in debt, even millions of dollars in pandemic relief loans forgiven, who are now attacking me for helping working-class and middle-class Americans,” Biden said.

The president accused Republicans of hypocrisy and said: “This is not a joke. You can’t make this stuff up.”

However, the two issues are not comparable.

The Paycheck Protection Program, supported on an overwhelmingly bipartisan basis in Congress in 2020, provided government loans to businesses so they could stay open during the COVID-19 lockdowns. The loans would be 100% forgiven if the employer did not lay off any employees.

In most cases, state and local government policies forced businesses to stop operating on a temporary basis. Thus, if businesses wanted to remain in existence, despite the forced closures, they had the option of accepting federal loans.

Without the PPP loans, more wide-scale layoffs and business closures likely would have occurred as a result of government action. By contrast, government policies did not force college students into a predicament in which they had to take out loans.