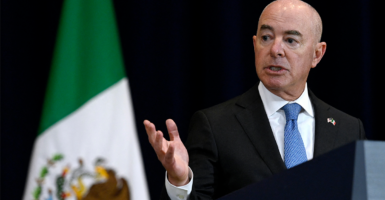 "This latest revelation demonstrates a total disregard for his duty and those he is entrusted to lead,” Rep. Chip Roy, R-Texas, says of Homeland Security Secretary Alejandro Mayorkas. Pictured: Mayorkas speaks during a joint news conference Oct. 13 with Mexico's foreign and security secretaries at the State Department. (Photo: Olivier Douliery/AFP/Getty Images

The six Senate Republicans who voted to confirm Homeland Security Secretary Alejandro Mayorkas declined to criticize him after the revelation that he knew Border Patrol agents didn’t “whip” Haitian migrants before he publicly spoke as if they did.

Other members of Congress, however, are calling for Mayorkas to resign or be impeached after an explosive email was unearthed by The Heritage Foundation’s Oversight Project. (The Daily Signal is Heritage’s multimedia news organization.)

The email shows that Mayorkas’ top media spokeswoman had told him Sept. 24, 2021, that no whipping by Border Patrol agents occurred five days earlier in Del Rio, Texas. But just hours later, in a White House press briefing, Mayorkas condemned his own agents before an investigation into the facts could be conducted.

The Daily Signal on Friday emailed press contacts for Senate Republicans Shelley Moore Capito of West Virginia; Susan Collins of Maine; Lisa Murkowski and Dan Sullivan of Alaska; Rob Portman of Ohio; and Mitt Romney of Utah, all of whom voted to confirm President Joe Biden’s nomination of Mayorkas to lead the Department of Homeland Security.

The Daily Signal asked each spokesperson whether his or her senator continued to support Mayorkas, and whether the homeland security secretary should resign or be impeached and removed from office.

“Secretary Alejandro Mayorkas must be impeached; he should have been impeached long before this for a host of reasons,” Rep. Chip Roy, R-Texas, told The Daily Signal after the news broke.

“I laid out the case for impeachment [of Mayorkas] last spring, and this latest revelation demonstrates a total disregard for his duty and those he is entrusted to lead,” Roy said.

Heritage’s Oversight Project obtained the email from Espinosa to Mayorkas along with other documents through a request under the Freedom of Information Act, or FOIA.

The six Senate Republicans whose offices didn’t respond to The Daily Signal had joined all Democrats on Feb. 2, 2021, in a 56-43 vote to confirm Biden’s nomination of Mayorkas.

The Daily Signal also asked the same questions in emails Friday to the offices of Senate Democrats Catherine Cortez Masto of Nevada; Maggie Hassan of New Hampshire; Mark Kelly of Arizona; Michael Bennet of Colorado; and Raphael Warnock of Georgia.

Some Senate Republicans, however, did criticize Mayorkas after Heritage unearthed the top media aide’s email to the homeland security secretary.

“If reports are true, then Secretary Mayorkas should resign,” tweeted Sen. Thom Tillis, R-N.C. “This is a failure of leadership and a complete betrayal of the hardworking Border Patrol agents who have been doing their best to maintain some control of the border in [the] midst of this administration’s failed policies.”

In the House, some Republicans spoke out against Mayorkas, including Rep. Elise Stefanik of New York, the No. 3 GOP leader, who told The Daily Signal that the Biden administration had “demeaned and degraded” Border Patrol agents.

Rep. Michael Cloud, R-Texas, tweeted: “Alejandro Mayorkas knew the facts, yet still chose to smear our brave border patrol. If only he had an ounce of the courage [of U.S. Customs and Border Protection that] he purports to lead. He should be impeached.”

Rep. Yvette Herrell, R-N.M., slammed Mayorkas on Twitter for throwing Border Patrol agents “under the bus to look good for his media friends,” and called on the homeland security secretary to resign.

“Mayorkas was presented with the opportunity to do the right thing on multiple occasions, yet he made the wrong decision at every turn. He deliberately chose to obfuscate the whole truth,” Rep. Ralph Norman, R-S.C., told The Daily Signal in an email.

Norman called on Mayorkas to resign or face impeachment in addition to apologizing to the Border Patrol agents.