‘I Had No Power Over My Kids’ Education,’ Maryland Mom Says After Asking to Opt Her Second Grader Out of LGBT Lessons 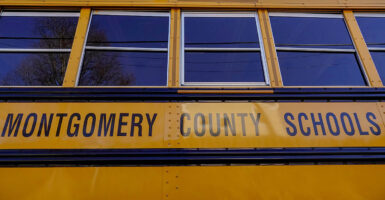 A mom says she was shocked to see her children’s elementary school in Montgomery County, Maryland, send out a video touting Pride Month and defining words such as "transgender." Pictured: A Montgomery County Public Schools bus on the move in Kensington, Maryland, Feb. 25, 2019. (Photo: Bonnie Jo Mount/The Washington Post/Getty Images)

An elementary school just outside the nation’s capital touted Gay Pride Month and defined words such as “transgender” in a video sent to students. A middle school in the same school system displays pride flags and “LGBTQ+ stories” in class.

A local mom, who wishes to remain anonymous but whom The Daily Signal will refer to as Rebecca Martin, said her two children were in second and fifth grade at Kensington Parkwood Elementary School in suburban Maryland when the school distributed a video marking Pride Month on June 4, 2021.

“I could not believe what I was seeing. I was just in absolute shock,” Martin said.

Martin also witnessed rainbow-striped pride flags on display in her son’s classrooms at North Bethesda Middle School on back-to-school night last fall, after he was enrolled there, she told The Daily Signal.

The lone bulletin board in one classroom was given over to what decorative letters described as “LGBTQ stories,” she said.

At the time it sent out a video celebrating Pride Month, Martin said, Kensington Parkwood Elementary used a hybrid learning model because of the COVID-19 pandemic: Students attended class in person some weeks and remotely during other weeks.

Her fifth grade son was taking classes from home the day the elementary school sent out a weekly video hosted by media specialist Esther Girón.

She goes on to share some “fun facts” about Pride Month, including feeling-based definitions for a list of words such as gender, transgender, pride, gay, and lesbian.

Girón also highlights two LGBT activists: the late San Francisco elected official Harvey Milk, described as “one of the first openly gay politicians in the United States,” and Laverne Cox, the transgender actor in the adult Netflix series “Orange Is the New Black.”

“I was in shock, and I was also frustrated and … angered,” Martin told The Daily Signal.

The terminology used in the video for the elementary school’s students wasn’t correct, she added. “They were confusing gender and biology.”

Martin said she especially was disturbed that her second grade daughter, as well as other kids as young as kindergarten age, were exposed to this content.

Martin said her children are the third generation in the family to be enrolled in Montgomery County Public Schools, which is among the most affluent school districts in the nation.

“Never, never … was anything remotely like this taught,” she recalled. “And if it was, you had to get parental permission.”

Martin said she sent an email to Kensington Parkwood’s principal and vice principal the day she saw the video on the school’s KPTV channel.

She requested to opt her children out of future attempts to push what she saw as age-inappropriate material on her kids without her consent, Martin said. But she never got a response from the school.

“I don’t feel, as a parent, this is appropriate for my child,” Martin told The Daily Signal. “I felt … I had no power over my own kids’ education.”

>>> Parents, teachers, and school administrators with similar concerns may email this reporter at gillian.richards@dailysignal.com

This past year, Martin said, she attended back-to-school night at North Bethesda Middle School, where her son now is enrolled.

A rainbow or transgender flag was on display in each of her son’s seven classes, she told The Daily Signal. Such “pride flags” hung on the same poles as American flags at the school.

In one classroom at Bethesda Middle School, Martin said, the single bulletin board on the walls featured what were called “LGBTQ stories.”

The principal of North Bethesda Middle School, AnneMarie Kestner Smith, described her school’s LGBTQ-related policies in an email to The Daily Signal.

“These are not topics in middle school curriculum but is [sic] something students are aware of,” Smith wrote, adding:

MPCS [Montgomery County Public Schools] takes pride in the level of support for both students and staff that identify in the LGBTQIA+ community. We have welcoming, affirming schools, classrooms, teams, and clubs. We value all of our children, youth, teachers, staff, and parents.

In June, Smith emailed students and parents to alert them to an incident during eighth grade lunch that she described as hateful toward the school’s “LGBTQ+ community.”

I was disappointed and dismayed to learn that during 8th grade lunch on the first day of PRIDE month some students displayed hateful and threatening behaviors towards members of and allies of our LGBTQ+ community. This type of behavior, along with any hateful, racist, or bullying behavior is not acceptable at North Bethesda Middle School.

The 8th grade administrator, counselor, and team leader created a safe space for students impacted by this event during lunch today and continue to be available to support.

Smith added that she and other school administrators would investigate and “address the behavior with appropriate consequences.”

It isn’t clear what the hateful behavior was, Martin told The Daily Signal. And what constitutes “hateful” for the principal isn’t necessarily what many parents would consider hateful, she said.

“It is critical that all [Montgomery County Public Schools] staff members recognize and respect matters of gender identity; make all reasonable accommodations in response to student requests regarding gender identity; and protect student privacy and confidentiality,” McKnight wrote.

Martin told The Daily Signal that she has decided to opt her kids out of most school activities when there is the opportunity to do so.

“I just don’t know what they’re going to be teaching,” she said.

“The saddest thing is, my daughter has been behind in her reading since kindergarten … she’s [now] in fourth grade,” Martin added.

She said Kensington Parkwood Elementary should be testing children for reading disabilities and concentrating on raising their reading ability to grade level.

The media office of Montgomery County Public Schools did not respond to The Daily Signal’s requests for comment.