In Europe, Rebellion Against the Elites Emerges as Trend 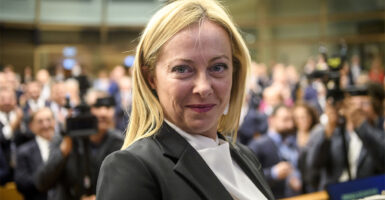 Giorgia Meloni’s victory in the Italian elections opens a new political outlook in Italy and in Europe, accelerating a trend characterized by the emergence of two increasingly well-defined blocs.

On one side, we find a bloc made up of political parties ranging from the Greens and the European radical left to the European People’s Party, which includes the socialists, confederations of liberal parties, and various Christian Democrat parties. Together, they make up a large consensus.

All of these groups share certain underlying characteristics: their defense of a federal European Union; their support for a woke ideological agenda; their responsibility in certain arbitrary curtailments of freedom, especially since COVID-19; and their indifference regarding the demographic crisis in the West.

Opposing this bloc is a large, popular, and national coalition headed by the European Conservatives and Reformists, headed by Italy’s Meloni since 2020. Those who make up this coalition conceive of a very different kind of Europe.

Their conception of the European Union is not one in which the member states place their productive model and the freedom of their citizens at the service of multinational corporations and multilateral bodies, but one that seeks to protect Europe’s citizens to guarantee their well-being. Neither are they prepared to expose Europe’s citizens to the ideological whims of distant elites.

These opposing visions of what the European Union should be also have witnessed some widely disparate trends in recent years. This issue is best illustrated by developments among the heavyweights of the European People’s Party and the European Conservatives and Reformists.

With the United Kingdom’s exit from the European Union, only Poland had a government whose party—the Law and Justice Party—was part of the European Conservatives and Reformists.

In comparison, the European People’s Party had eight countries under “people’s” governments, headed by Chancellor Angela Merkel’s Christian Democratic Union in Germany (responsible together with the Social Democratic Party for the EU’s defenselessness regarding energy matters, alongside others). These governments also included that of former Spanish Prime Minister Mariano Rajoy.

In 2022, however, the situation is quite different.

Poland is still under a government whose party is included in the European Conservatives and Reformists, and now it has been joined by the government of the Czech Republic.

The number of European People’s Party countries, by contrast, comes to 10. But in economic terms, this bloc now has governments in countries that account for barely 9.4% of the EU’s gross domestic product, while the European Conservatives and Reformists has maintained its level at around 18% since 2019.

Furthermore, at a demographic level, the countries with governments headed by parties affiliated with the European People’s Party currently represent just 16.2% of the EU’s population. That’s far from the 24% of the population under governments aligned with parties belonging to the reformist group.

The alternative vision of the current European Union is progressing and gaining ground.

The trend is part of a wider cultural rupture whose consequences would appear to be quite irreversible: the consolidation of a Right that is not subject to globalism—a globalism that calls into question the grand confluence of interests and the concentration of power among the financial, media, technological, and political elites—and that defends the idea of a strong nation-state.

This movement believes that the nation-state is the only way of preserving the sovereignty of peoples.

And, in contrast to traditional indifference regarding social and economic issues, the movement extols the need to protect everything that is threatened, ranging from the family and the sanctity of life to companies, strategic national energy sectors, and the security of our citizens.