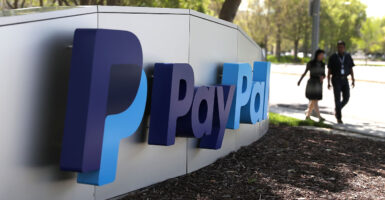 House Republicans have requested answers from PayPal about a since-retracted policy that would have fined customers for “misinformation.” Pictured: a sign outside PayPal headquarters in San Jose, California, April 9, 2018. (Photo: Justin Sullivan/Getty Images)

House Republicans are launching an inquiry into PayPal after the payment processing company sparked major controversy for a policy that would fine customers for “misinformation.”

The controversy began when news broke earlier this month that PayPal would fine customers $2,500 for spreading misinformation. PayPal quickly retracted the policy, saying it was a mistake that “went out in error” but not before “cancelPayPal” was trending and Twitter users boasted of deleting their accounts. The company’s stocks tumbled as the news unfolded.

Now, House Republicans want answers. They sent a letter to PayPal President and CEO Dan Schulman asking how the policy originated, who approved it, whether the Biden administration was involved, and more.

“As a leading financial technology company, it is concerning that a user agreement that contemplates the restriction of free speech was uploaded and disseminated to PayPal users—even if in error,” the letter said. “We understand your company is currently investigating this matter. Upon the conclusion of your investigation, we request that you provide a briefing for the Committees as soon as practicable.”

The letter requests answers by the end of the month to a range of questions, including whether any entities were affected by the policy change, when the internal investigation will be over, and who was responsible for the policy in question.

Critics also point out that while PayPal rescinded its misinformation policy, the company still maintains a $2,500 “liquidation” policy against accounts accused of “discrimination” and “hatred” as well as “intolerance” as the company chooses to define it.

“The ability to transact without fear of retribution and political censorship is the foundation on which a free economy is built,” Emmer said. “We cannot afford to sacrifice these freedoms, and we must keep a close eye on any actions that erode them. The now-rescinded penalties outlined in PayPal’s Acceptable Use Policy were deeply concerning, and the American people deserve answers about how these decisions are made and whether their speech will be protected on this kind of platform.”