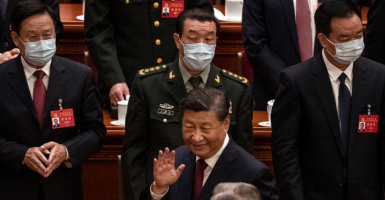 A new report offers harrowing insight into the strength of Communist China’s military a day after Chinese President Xi Jinping renewed calls for the “reunification” of China and Taiwan.

“Resolving the Taiwan question is a matter for the Chinese, a matter that must be resolved by the Chinese,” Xi said Sunday at the opening session for the 20th National Congress of the Chinese Communist Party in Beijing.

“We will continue to strive for peaceful reunification with the greatest sincerity and the utmost effort, but we will never promise to renounce the use of force, and we reserve the option of taking all measures necessary,” Xi said.

The Heritage Foundation on Tuesday will release its 2023 Index of U.S. Military Strength, a document of nearly 600 pages that examines and assesses the strength of America’s military while comparing it to that of other nations such as China, Iran, and Russia. (The Daily Signal is the multimedia news organization of The Heritage Foundation.)

The report warns that the U.S. military “is at growing risk of not being able to meet the demands of defending America’s vital national interests” and is “rated as weak relative to the force needed to defend national interests on a global stage against actual challenges in the world as it is rather than as we wish it were.”

“A strong U.S. military is all the more important because America’s existential threat—the People’s Republic of China—is expanding its strength and global influence with the cunning of serpents,” Heritage Foundation President Kevin Roberts writes in the preface, adding:

China has invested in an arsenal of missiles designed to target U.S. warships, has upgraded its fleet of fighter jets, and is fielding advanced equipment that is rivaling the U.S. military in quality.

U.S. intelligence experts gauge that China has surpassed the U.S. in hypersonic missiles, space systems, and naval shipbuilding. It has initiated a massive increase in its nuclear capabilities.

Dakota Wood, a senior research fellow in The Heritage Foundation’s Davis Institute for National Security and Foreign Policy, warned in an email to The Daily Signal that China is “deadly serious about fielding the most advanced forces possible.”

“Given the difference in ranges and settings, its ever-expanding military will consistently have an advantage in numbers compared to what the U.S. is currently able to field thousands of miles from home,” Wood said of the communist regime.

“With this in mind, the U.S. military would be hard-pressed to defend our national interests and obligations in the Indo-Pacific region given its comparatively small size, the age of its equipment, and its lack of readiness across several important elements of the force.”

Dean Cheng, who until his recent retirement was Heritage’s research fellow for Chinese political and military affairs, warns of the growing conventional capabilities of China’s People’s Liberation Army.

“Nearly two decades of officially acknowledged double-digit growth in the Chinese defense budget have resulted in a comprehensive modernization program that has benefited every part of the [People’s Liberation Army],” Cheng writes. “This has been complemented by improvements in Chinese military training and, in 2015, the largest reorganization in [PLC] history.”

A 2015 reorganization of the People’s Liberation Army resulted in “the establishment of a separate ground forces headquarters and bureaucracy; previously, the ground forces had been the default service providing staffs and commanders,” Cheng writes.

Cheng explains that the People’s Liberation Army “is no longer automatically in charge of war zones or higher headquarters functions” and “has steadily modernized its capabilities, incorporating both new equipment and a new organization.”

“It has shifted from a division-based structure toward a brigade-based one and has been improving its mobility, including heliborne infantry and fire support,” Cheng writes in the index. “These forces are increasingly equipped with modern armored fighting vehicles, air defenses, both tube and rocket artillery, and electronic support equipment.”

By contrast, the U.S. Army’s equipment is losing its competitive advantage against adversaries such as China and Russia, which “have much more substantial inventories of conventional, precision, ground-launched missiles and rockets,” says Thomas Spoehr, a retired Army lieutenant general who now directs Heritage’s Center for National Defense.

The Index of U.S. Military Strength, now in its eighth year, also highlights the growing strength of China’s navy, the largest in Asia and bigger than the U.S. Navy with more battle force ships, defined as “the types of ships that count toward the quoted size of the U.S. Navy.”

“Although the total number of ships has dropped, [China’s navy] has fielded increasingly sophisticated and capable multi-role ships,” Cheng writes.

“As the U.S. Navy struggles to build, maintain, and crew a fleet of 11 aircraft carriers, China is rapidly catching up both in numbers and platform capability,” Brett Sadler, a senior research fellow in naval warfare and advanced technology in Heritage’s Center for National Defense, writes.

Sadler explains that China’s “newest carrier, the Type-003, like the Ford-class, will utilize electromagnetic catapults that will give its air wing greater range and sortie rates, thus greatly narrowing the capability gap.”

Like its navy, China’s air force is the largest in Asia with upward of 1,700 combat aircraft, the report says. China’s air force has developed into “one that is capable of power projection, including long-range precision strikes against both land and maritime targets.”

Although they currently have limited power projection capability, both [China’s air force and naval aviation] are seeking to extend their reach.

[China’s air force], in particular, has received repeated calls from its leadership to become a truly ‘strategic’ air force, able to project power at long distances and support Chinese national interests wherever they extend.

The Index of U.S. Military Strength also highlights that China has expanded its strategic nuclear warheads and  ballistic missile submarine fleet, in addition to “working on a cruise missile submarine.”

“As a result of its modernization efforts, China’s nuclear forces appear to be shifting from a minimal deterrent posture, suited only to responding to an attack and then with only limited numbers, to a more robust but still limited deterrent posture,” Cheng writes.

China has completed its nuclear triad with the addition of a strategic nuclear-capable bomber, is deploying hundreds of theater-range ballistic missiles in the Indo-Pacific that can strike U.S. bases and allied territory with precision, and is testing and deploying nuclear-capable hypersonic weapons, including one that orbited the globe on a fractional orbital bombardment system (FOBS) before being released to glide to its target.

China’s cyber and space capabilities were consolidated in the 2015 reorganization as part of the People’s Liberation Army Strategic Support Force, which effectively created a Chinese “information warfare” force that Cheng writes is “responsible for offensive and defensive operations in the electromagnetic and space domains.”

“In early 2022, China’s Shijian-22 towed a dead Chinese satellite into a ‘graveyard’ orbit above the [geosynchronous orbit] belt,” Cheng writes. “While this was officially touted as a servicing operation, the ability to attach one satellite to another and then tow it also has potential military implications.”