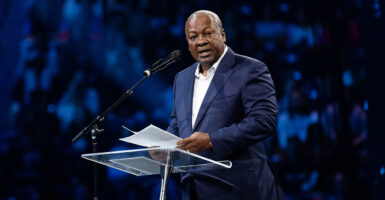 America’s largest Christian university convened 600-plus U.S. and African CEOs to promote joint business opportunities and reduce Africa’s reliance on Communist China and the impact it has on U.S. security. Pictured: John Mahama, former president of Ghana, speaks at Liberty University at the start of the Networking the Nations CEO Summit, Oct. 5, 2022, in Lynchburg, Virginia. (Photo: Liberty University Photos) 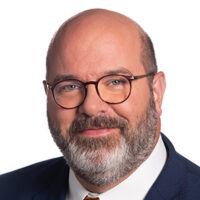 Brian Gottstein is a senior communications writer and editor at The Heritage Foundation, a best-selling author, and a former radio talk show host.

While the U.S. government often lacks a coherent policy to deal with Communist China’s dangerous military, political, and economic influence around the world, many in America’s private sector—brought together by the nation’s largest Christian university—are stepping into the breach to do something about it.

Last week, Liberty University convened more than 630 U.S. and African CEOs, political figures, and faith leaders to network and promote joint business opportunities for U.S. companies and African nations. With those opportunities come the potential for reducing Africa’s heavy reliance on China for economic development and the Chinese Communist Party’s influence on the continent—as well as the negative impacts that influence has on the United States.

Networking the Nations CEO Summit attendees included the chief executive officers of Lowe’s, Hobby Lobby, and hundreds of other large and medium-sized American and African businesses, as well as the prime minister of Congo, the former president of Ghana, and delegations from several other African nations.

Dave Brat, dean of Liberty’s School of Business and host of the summit, said the opportunities created there will lead to growth for American businesses as well as job creation and prosperity for the African people.

China’s role in Africa was not the sole focus of the event, but it factored in to many of the discussions there. Brat is an economist by trade and a former congressman from Virginia who for the past few years has been using his connections in Washington and at Liberty to raise awareness about just how dangerous China is becoming economically and militarily. (Full disclosure: I was Brat’s communications director during his first term in Congress.)

China’s influence in Africa is exceedingly strong. It has loaned African nations massive amounts of funding that most can’t repay and built them infrastructure that many couldn’t have afforded on their own, making their governments beholden to the Chinese Communist Party.

In return, China has gained access to vast amounts of rare earth minerals and other natural resources on the African continent. With those resources under its control, China has the ability to disrupt the U.S.’ and its allies’ access to critical raw materials such as cobalt, which is used in many commercial, industrial, and military applications.

China also uses its influence to undermine the U.S. by pushing African nations to vote against U.S. interests at the United Nations and by promoting communism and authoritarianism throughout the continent over the U.S.’ preferred exports of freedom and capitalism.

At the summit, one constantly heard the phrase “win-win.” American leaders touted how U.S. businesses and their employees would prosper from gaining entry to new and growing markets in Africa but proclaimed how they also wanted the people of Africa to succeed at the same time.

Former Maytag Corp. CEO Lloyd Ward called the efforts “market-driven industrialization in service of the Kingdom of God.” Ward now works in Africa to help form partnerships with governments and the private sector to create sustainable businesses that help capture the value of countries’ crops, natural resources, and precious metals for the benefit of their economies and citizens as a whole.

So, how does this way of doing business help the U.S.? Fostering strong economies in Africa means fostering good trade partners, stronger democracies that are natural American allies, and stable countries that curtail security problems and avoid humanitarian catastrophes.

Virginia Lt. Gov. Winsome Sears was a featured speaker at the event. She told The Daily Signal, “The free market is the best place to develop and innovate the economy of the future. The old models of simply providing aid are not enough. We must strengthen economic development to reduce African dependency on China for infrastructure investment so that it won’t become a national security crisis.”

“Civil society is all of us, including these CEOs and their companies, these leaders from Africa, and Heritage,” Roberts said. “Heritage, as the largest right-of-center public policy organization in the country, if not the world, must participate in events like this because we’ve got to work together to rejuvenate American civil society.”

Roberts said the government isn’t doing enough to stop the threat of the Chinese Communist Party and the spread of its influence across the globe, calling the United States’ policy toward China “feckless both under Democrat and Republican administrations,” although he noted it was starting to get on the right track under the Trump administration.

Heritage has made combating the influence of the Chinese Communist Party one of its highest priorities.

Said Brat, “U.S. foreign policy toward China is a disaster, but a substantial portion of the CEO class has to take some responsibility for the relationships they are forming in China right now. This summit is one small way to counter China’s influence in Africa, but it’s an important way, because it’s fostering business-to-business relationships without having to go through all the government bureaucracies.”

Mobilizing the U.S. private sector and good old American capitalism to fight the Chinese Communist Party’s influence in Africa and create a win-win for U.S. and African prosperity is an initiative that doesn’t depend on who’s in power in Washington to work.

If we’re going to stop the expansion of Chinese communism and the harm it bodes for America, civil society must step in where government is failing to act. The very future of our country depends on it.