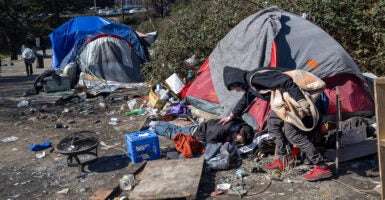 The Seattle-based Discovery Institute issued a report on Wednesday to help lawmakers change misguided government policies on homelessness. Pictured: A man checks on a friend who passed out after smoking fentanyl in a Seattle homeless encampment on March 12. (Photo: John Moore/Getty Images)

The Discovery Institute’s Center on Wealth and Poverty released a report Wednesday aimed at helping lawmakers change government policies on homelessness, which the institute considers ill-advised.

The solution to homelessness must involve “getting therapy and treatment, and having requirements and programs,” said Robert Marbut Jr., the project coordinator and a former executive director of the U.S. Interagency Council on Homelessness, at a Wednesday luncheon in Washington.

Left-wing activists claim lack of available housing is the primary problem, Marbut noted. But he and Discovery Institute board Chairman Bruce Chapman contend that President Barack Obama’s Housing First program, which the federal government adopted in 2013, has become a “housing only” solution in practice.

Advocates of “housing first” predicted that federal housing vouchers would end homelessness in 10 years, by 2023. Department of Housing and Urban Development numbers show homelessness has, in fact, skyrocketed in recent years. The total number of individuals experiencing homelessness in America is estimated as approaching 1.2 million.

The authors of the Discovery report argue that Housing First advocates’ prediction failed because of the “flawed assumptions about the nature of the crisis, especially the prevalence of untreated mental illness and drug use disorders within the homelessness community.”

“There’s no better experiment,” said Marbut. “If Housing First was the right policy, if just giving away vouchers was right, California should have the lowest homelessness rate ever in America’s history.”

The report found unsheltered street-level homelessness in California actually rose more than 47% from 2015 to 2019. “Sometimes the policy is what causes the problem,” said Marbut.

Some 75% self-reported that they struggled with addiction, and 51% said they lost their housing because of their addiction.