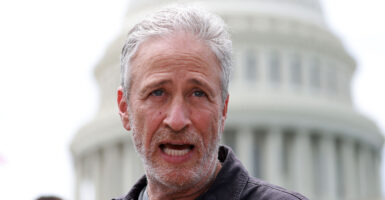 In an Oct. 7 episode of “The Problem with Jon Stewart” podcast, “The War Over Gender,” the comedian and political commentator discussed sex and gender.

The episode created a lot of buzz. Leftists praised it for supposedly debunking what they called “hateful lies” and said it was “a breath of fresh air.” But a closer look shows the show started out with significant bias that perpetuated at least four myths and false notions that are harmful to the debate and to children in particular.

Myth #1: Sex and Gender Are Complicated

It didn’t help that Stewart went into the podcast determined to highlight the complexities of sex, gender, and gender transitioning. Stewart’s own promotional tweet said the episode was dedicated to him “break[ing] down the gender binary and gender spectrum.” So, he didn’t go into this with skepticism, but with a pro-transgender bias.

The former host of cable’s “The Daily Show” immediately mocked conservatives for asking the question “What is a woman?” first raised during the Senate confirmation hearings in March for now-Supreme Court Justice Ketanji Brown Jackson. He claimed the simplicity of the question was old-fashioned and the answer far more nuanced than it appeared on its face.

“We are in a new dawn of gender and sex complexity, where those who don’t fit into a simple binary are meant to be seen with humanity,” Stewart said. “The problem with gender and sex? It turns out none of this is simple.”

Reality: The number of people who are intersex, who have both male and female genitalia, make up less than one-half of 1% of the population. The debate over sex and gender is not about this tiny percentage of people. To suggest otherwise is disingenuous.

The debate over sex and gender is quite simple. It’s over whether or not a person can have gender dysphoria to the degree that the optimal “cure” is to adopt social changes, followed by sex-change surgery to assuage it.

The facts are that 99.9% of men and women are born with specific genitalia that designate which sex they are, and most tend to adopt mannerisms and clothing that align with that gender. This entire debate is over the remaining minuscule percentage who think gender is fluid, contradicting centuries of science and tradition.

Myth #2: Bills Against Transgenderism Are Hateful

Stewart repeatedly emphasized that dozens of states have introduced legislation that protects girls and women from the privacy and safety concerns associated with being forced to share otherwise sex-segregated spaces with biological males.

Instead of recognizing why there have been so many state bills like this, many of which have been enacted into law, Stewart immediately adopted the Left’s position, which is that such legislation is “anti-transgender.” He mocked the fact that so many measures like this have been introduced all over the country in the first place.

“Anti-trans legislation increased over 800% since 2018—800%,” Stewart said. “What could justify this unprecedented urgency? Did trans people storm the Capitol? Did they steal classified nuclear intel from the White House and keep it in a humidor in Florida? What is the threat?”

Reality: Forcing girls and women to compete with biological boys who “identify” as female is just plain unfair. Forcing them to share private spaces with biological males, whether in restrooms, locker rooms, or women’s shelters, is also inequitable and unsafe. Predators have and will continue to take advantage of areas where legislation does not protect females. It’s disingenuous to assert that legislation that protects girls is rooted in bigotry. It most definitely is not.

In an emotional plea, Stewart suggested parents who really care about their kids’ pain will indulge them in any treatment necessary to assuage this.

“If my daughter or my son came to me in agony, and I knew there was a program that I could get them into that had positive effects on their mental health, I would swim across rivers and climb mountains and tunnel through whatever I needed to get to save that child’s life,” he said. “And, my guess is, you’d do the same.”

Stewart’s comments imply that if parents don’t immediately help their child transition to the opposite gender, when they’re complaining about it, those parents are heartless or harmful. That’s not only presumptuous, it’s wrong.

Reality: First, there’s ample evidence that children who complain about gender dysphoria in their teens are experiencing effects of a contagion, not true dysphoria. For that, there is no need to rush to treatment.

Second, The Heritage Foundation has debunked the myth that “gender-affirming” care reduces suicide risk. In fact, until around 2015 when treatment became more commonplace, data shows there’s no difference in youth suicide rates between kids that have access to “gender-affirming” care without parental consent and kids that don’t. (The Daily Signal is the news outlet of The Heritage Foundation.)

Just as an aside, Stewart’s fellow comedian-commentator Bill Maher, a traditional liberal but not a reflexive leftist, in May on his HBO show “Real Time,” offered a diametrically different perspective: “When I was a kid, I wanted to be a pirate. Thank God nobody took me seriously and scheduled me for eye removal and peg-leg surgery.”

Stewart was applauded for the segment of the show in which he interviewed Arkansas Attorney General Leslie Rutledge. Rutledge repeated a common statistic many transgender proponents want to ignore; namely, that 98% of all youth with gender dysphoria eventually grow out of it. “That is an incredibly made-up figure,” Stewart said, saying it didn’t “comport” with any of the studies that exist from medical organizations.

Reality: Rutledge’s statistic is in no way fabricated. Plenty of studies support it. It’s just often viewed as flawed because it doesn’t support the ongoing, left-wing narrative that kids must transition via sex-change surgery or hormone blockers to be happy.

A “wait and see” approach is best for youths who have dysphoria later in their childhood. Transgender activists just don’t mention that because it doesn’t fit their narrative.