Social Security’s 8.7% COLA Will Protect Retirees From Inflation, but Will Hasten Program’s Insolvency 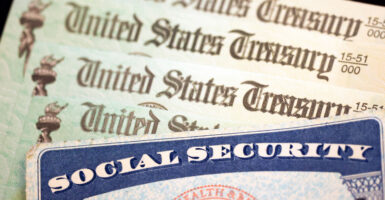 The Social Security Administration on Thursday announced recipients will receive an annual cost-of-living adjustment of 8.7% next year. That's considerably larger even than this year's 5.9% increase, which was the largest since 1982. The increases are intended to offset the high rates of inflation of the Biden economy. (Photo illustration: Kevin Dietsch/Getty Images)

The Social Security Administration announced Thursday that beneficiaries will receive an 8.7% cost-of-living adjustment next year. That’s good news for seniors today who—like all other Americans—are struggling with rising costs, but it comes at the expense of a diminished Social Security system for current and future retirees.

Social Security is funded by current workers’ payroll taxes, but since the average worker’s wages increased only 4.1% over the past year, that means Social Security’s revenues have increased at less than half the rate of its newly announced expenditure increase.

Add in the fact that there are 2.8 million fewer people working today compared with the pre-pandemic employment-to-population ratio, and Social Security’s revenues are almost certainly below trend while its costs are above trend.

Even before this large COLA increase, Social Security was projected to run out of money to pay scheduled benefits in 2034. Absent reform, that means that anyone who is 55 or younger today won’t receive a single full Social Security benefit.

When Social Security runs out of money, retirees won’t receive a $1,750 benefit increase—the average benefit boost for a retired worker in 2023—but instead will be subject to a $5,040 benefit cut.

Seniors are struggling from the effects of inflation, and many of them lack the ability to work, which makes Social Security’s COLA especially important for them.

But while a portion of retirees’ benefits are held harmless from inflation, workers can’t escape rising costs. Despite earning almost $3,800 more per year since January 2021, the average worker is $3,000 poorer after inflation’s eaten away $6,800 of value from their paycheck.

Those same workers will be the ones who will either receive only a fraction of what today’s Social Security beneficiaries receive, or they will pay substantially more in taxes throughout their lifetimes.

This year’s Social Security COLA is yet another factor contributing to massive deterioration in the U.S.’ fiscal outlook over the past few years, which will make it all the more difficult to maintain Social Security’s current benefits.

Policymakers must act now, and Congress has a choice.

It can expand Social Security—increasing taxes and increasing benefits for everyone—or make it better targeted.

The Heritage Foundation has proposed a set of reforms that would better target Social Security to its original intent, including gradually shifting to a universal benefit that would lift lower-income retirees out of poverty, slowly raising the retirement age and indexing it to life expectancy, using a more accurate inflation measure, and eliminating work disincentives. All of that would protect and improve Social Security. (The Daily Signal is the news outlet of The Heritage Foundation.)

The Heritage Foundation’s Social Security model estimates that those changes would solve the program’s shortfalls and allow for a roughly 20% tax cut.

A better-targeted program would also benefit the economy. The Penn Wharton Budget Model projected that reforms similar to what The Heritage Foundation has proposed would result in an economy that is 7.3%, or $1.6 trillion, larger than with reforms that expand Social Security for everyone.

That translates into $10,740 more in annual income per household across the U.S.

Each year that policymakers fail to act, the costs and consequences of Social Security’s inevitable reform just become larger. Over just the past 10 years, Social Security’s unfunded obligations more than doubled, to $20.4 trillion—the equivalent of $157,000 per household.

That’s not a cost the average household can afford—especially with out-of-control inflation.

By tackling Social Security reform now, policymakers could protect a popular program and reduce the chances of a fiscal crisis.

Getting America’s fiscal house in order would ease the consequences of inflation now and improve Americans’ future opportunities and financial security.