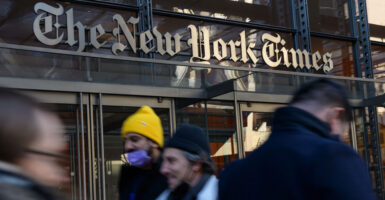 The New York Times is signaling that it’s not wild about Joe Biden running for president again. Suddenly, it announced his statements are routinely unfactual. He’s a habitual liar.

Why is this discovery emerging now?

The online headline of its Oct. 11 story was: “Biden, Storyteller in Chief, Spins Yarns That Often Unravel.” The subtitle: “President Biden has been unable to break himself of the habit of embellishing narratives to weave a political identity.”

Times reporters Michael Shear and Linda Qiu began with Biden telling survivors of Hurricane Ian that he and Jill lost most of a house to a lightning strike. That’s not true. News reports at the time described it as “a small fire” that was “contained to the kitchen.”

They said this wasn’t an isolated embellishment. They noted Biden once told this story as “having had a house burn down with my wife in it.” The Times explained:

The exaggerated biography that Mr. Biden tells includes having been a fierce civil rights activist who was repeatedly arrested. He has claimed to have been an award-winning student who earned three degrees. And last week, speaking on the hurricane-devastated island of Puerto Rico, he said he had been ‘raised in the Puerto Rican community at home, politically.’

They said Biden has long “embraced storytelling as a way of connecting with his audience … But Mr. Biden’s folksiness can veer into folklore, with dates that don’t quite add up and details that are exaggerated or wrong, the factual edges shaved off to make them more powerful for audiences.”

But here’s the interesting part. Qiu is the paper’s designated “fact-checker.” So, if Biden is habitually spinning yarns that unravel, she must be busy with Biden checks, right? No. She hasn’t “fact-checked” Biden since Aug. 20, 2021, on the Afghanistan withdrawal fiasco under an extremely mild headline: “Clarifying Biden’s Take of Evacuation.”

A peek at her archive of articles since then includes at least 14 “fact checks” of Republicans and/or conservatives. This 14-to-1 imbalance in target selection would remind you of PolitiFact—which makes sense, because that’s where Qiu worked before joining the Times.

This “fact-checker” unironically corrected Republicans on the anniversary of the Jan. 6 riot that one-third of Republicans think the riot was “mainly peaceful.” That’s just as wrong as the post-George Floyd rioting of 2020—but she also thinks it’s a terrible idea to compare them.

On March 9, Qiu wrote an article titled “Republicans Wrongly Blame Biden for Rising Gas Prices,” insisting the “primary reason” was the pandemic and “its disruptions to global supply and demand.”

On May 13, Qiu insisted (with other “fact-checkers”) that Biden couldn’t be blamed when the administration provided baby formula to illegal immigrants while citizens couldn’t find it in stores. It’s “required by a lawsuit settlement,” so the outrage can’t be blamed on Biden. She also quoted Rep. Ruben Gallego, D-Ariz., calling Republican critics “the pro-starvation caucus,” and he drew no fact check.

On May 28, she tried to pick apart claims at the National Rifle Association convention, including Sen. Ted Cruz, R-Texas, claiming Chicago was the “gun violence capital” of America. There’s something comical in Qiu protesting that there’s a perception that the city with the most gun murders is the gun violence capital. She insisted smaller cities had a higher murder rate per capita.

This dramatically imbalanced pattern of targeting explains why conservatives are hostile to “fact-checkers,” not to facts. Conservatives object to liberal journalists claiming we are “misleading” or “false” when liberals are just “disagreeing” and nitpicking facts placed before them.