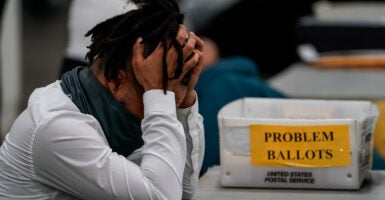 Mike Pashby and his family have lived in their single-family home in Kalamazoo, Michigan, for over seven years and never met a man named Larry Hodge.

But starting in 2020, Pashby regularly began getting absentee ballot applications and voting notices addressed to Hodge in the mail. Despite his notifying election officials with the Kalamazoo Township, Kalamazoo County, and the Michigan Secretary of State’s Office, the notices kept coming.

“The Lansing and Kalamazoo voter registration records are a mess,” Pashby told The Daily Signal in a phone interview. “The township checked and they put mine in a stack with dozens of other similar cards. It wasn’t just me.”

Meanwhile, mail-in and absentee voting historically have been among the biggest avenues for voter fraud.

No other mail for Hodge has come to his home, Pashby added, except for at least six applications for absentee ballots.

After Pashby had received at least six applications for ballots, and had made repeated visits, the township clerk finally told him this year that it would take two years to remedy.

“My clerk informed me that it will take two years to ‘verify’ [Hodge] is not eligible to vote from my home address, even though records show he had not lived at the address for 20-plus years,” Pashby said.

No one from the Pashby household could have requested a ballot for Hodge. But if someone had, according to the top Kalamazoo County election official, a ballot would not have been sent to the address.

“There is a process in place. When local clerks get an application that is filled out, they review it,” Meredith Place, Kalamazoo County’s clerk and register of deeds, told The Daily Signal in a phone interview.

“First they see if that voter is registered at that address. If they are not, they won’t do anything with it,” Place said. “Next, they do signature verification. Local clerks are interested only in sending ballots to qualified voters, not sending out ballots willy-nilly.”

Place said she herself has gotten multiple applications for absentee ballots in the mail and just tosses them, as she would other junk mail. She said private parties are sending those.

“Clerks aren’t sending out absentee ballot applications to voters that do not live at that address,” Place said. “If voters get the wrong application, they can throw it away or better yet, recycle. I get mail wanting me to get new windows. I don’t need new windows, so I throw it away.”

However, the ballot applications sent to Pashby’s home were marked clearly as coming from Kalamazoo Township, based on photos of forms that Pashby sent to The Daily Signal.

Neither Kalamazoo Township nor the Michigan Secretary of State’s Office responded to inquiries from The Daily Signal for this report.