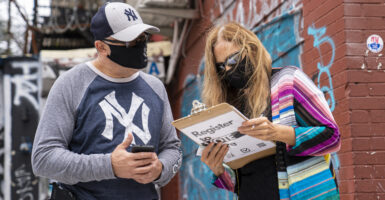 “The Department of Justice must send a clear message that compliance with federal law is not a choice but an obligation and that those who choose not to follow it will be held accountable,” Rep. Claudia Tenney, R-N.Y., writes Assistant Attorney General Kristen Clarke. Pictured: Eileen Weitzman, right, a volunteer with Brooklyn Voters Alliance, registers a New York City resident to vote on Sept. 26, 2020 (Photo: Robert Nickelsberg/Getty Images)

As New York state struggles with allegations of election fraud, a new review of its voter lists shows that basic personal identification information is missing for 3.1 million registered voters, in apparent violation of federal law.

States vary, but the general standard for voter registration information is to include either a Social Security number or a driver’s license number, according to a report by the Public Interest Legal Foundation.

Rep. Claudia Tenney, R-N.Y., founder and co-chairman of the House Election Integrity Caucus, called Thursday for the Justice Department to investigate potential violation of the Help America Vote Act in her state.

“The Department of Justice must send a clear message that compliance with federal law is not a choice but an obligation and that those who choose not to follow it will be held accountable,” Tenney wrote in a letter to Kristen Clarke, the assistant attorney general in charge of the Justice Department’s Civil Rights Division.

“I request that you immediately begin ensuring this key law is enforced across the country,” Tenney wrote to Clarke.

Section 303(a) of the federal Help America Vote Act prohibits states from accepting a voter registration form from an individual without a unique identifying number.

“The United States Department of Justice is tasked with enforcing the provisions of HAVA,” the report from the Public Interest Legal Foundation says. “If New York is failing to comply with federal law and failing to capture these required numbers at registration, or a reregistration, then only the Voting Section at DOJ can act to fix the problem.”

That section is part of the Justice Department’s Civil Rights Division.

However, J. Christian Adams, president of the legal foundation, said he doesn’t anticipate action from the Justice Department.

“It is probably a HAVA violation, but the DOJ will do what they do best with federal election law violations, which is nothing,” Adams told The Daily Signal. “Kristen Clarke is too busy chasing Bull Connor fantasies.”

Since taking office in 2021 as an appointee of President Joe Biden, Clarke has led federal litigation against the states of Georgia, Arizona, and Texas over their voter ID-related laws.

Without personal identification information, Tenney’s letter to Clarke says, “matching one John or Jane Doe to another is an incredibly difficult task that could lead to ineligible voters remaining on the rolls, voters registering in multiple states, or a voter receiving more than one opportunity to vote in a given election.”

“With the increase of mail-in voting in New York, this could become particularly problematic, causing even greater chaos and dysfunction in the election process than [exists] already,” Tenney wrote the assistant attorney general.

Kim did not respond to inquiries from The Daily Signal for this report.

Meanwhile, Nick Langworthy, chairman of the state Republican Party, accused Democrats of mailing already filled-out absentee ballot application forms to supporters, who in turn mail them to election offices from their home addresses.

Lax use of personal identification information isn’t exclusive to New York, but 23% of voters in the Empire State lack basic information to distinguish them from someone with a similar name, according to the Public Interest Legal Foundation.

“What makes this disclosure from the New York State Board of Elections peculiar is that it appears to be an outlier,” the report says, adding:

Nearly every other state disclosed extremely low missing PII [personal identification information] totals with few exceptions. Other states are complying with federal law. Are the citizens of New York uniquely shy about providing this information, or as seems more likely, are New York election officials failing to accurately record the data after it is provided?

A spokesperson for the New York State Board of Elections did not respond to an inquiry from The Daily Signal by publication time.

The legal foundation’s report says the missing data will affect the 2022 election, and every election after that, unless the lapse is remedied.

“With the growing use of mail ballot voting, states like Florida and others are pursuing new ways of leveraging PII to better protect the integrity of mail ballots,” the report says. “New York is significantly disadvantaged in trying to emulate these emerging best practices with significant amounts of missing data.”