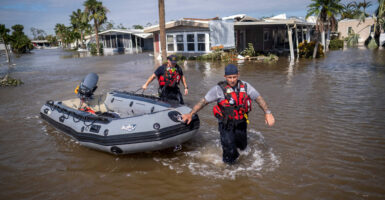 Search and rescue personnel wade through the waters of a flooded neighborhood as they search for survivors in the aftermath of Hurricane Ian in Fort Myers, Florida. (Photo: Ricardo Arduengo / AFP/Getty Images)

The weather is difficult to predict. Media narratives aren’t.

The media bat signal is up to exploit the latest crisis for left-wing policy goals.

As Florida deals with the cleanup from Hurricane Ian—which ravaged the state, killed hundreds, and displaced thousands more—media outlets have peddled the idea that this tragedy is the result of climate change.

Some even suggested that Florida shouldn’t get aid because some of its elected officials oppose federal legislation that would pump billions of dollars into various green initiatives.

The Times report said that while Republicans in the state are requesting aid, they “don’t want to discuss the underlying problem that is making hurricanes more powerful and destructive.”

What was the cause, according to the Times?

“The burning of fossil fuels.” Of course.

There was a somewhat amusing admission in the Times piece, pointed out by commentator Erick Erickson on Twitter. The “climate” legislation the writers highlighted was the “Inflation Reduction Act.”

It turns out, President Joe Biden’s spending bill—labeled and sold as a method to reduce inflation—had little to do with stopping inflation and was a whole lot more about jamming through Democrat spending priorities and controlling people’s lives.

Now that it’s passed into law, the media doesn’t even have to maintain the pretense.

The Times wasn’t alone in saying that supermassive hurricanes are on the rise while insinuating that more big storms are on the way if we don’t spend billions to tackle man-caused climate change as the Democrat Party suggests.

Of course, the Biden administration uses this kind of information to enact sweeping climate initiatives.

But is any of it true? Are fossil fuels and climate change really causing more and larger hurricanes?

Evidence suggests that the narrative about an increase in deadly hurricanes is more a media creation than anything else. In fact, it appears that there has been a slight decline in major hurricanes making landfall in the United States in the past century.

First, Shellenberger explained that the “increasing cost of hurricane damage can be explained entirely by more people and more property in harm’s way.” He compared pictures of Miami Beach to what it looked like a century ago. It’s clearly filled out a great deal in the past hundred years as the area built up.

It’s a similar phenomenon to how wildfires in California burn down many more homes now. The cost of housing in cities pushed more people to live in areas with significant fire hazards, so the property damage is naturally much higher than in the past.

As far as numbers, Shellenberger pointed to data from the National Oceanic and Atmospheric Administration that shows “no long-term trend in hurricane counts” since the 1880s.

NOAA expects a 25% decline in hurricane frequency in the future. Sure, the prediction could be wrong, but available information clearly demonstrates that there is no sudden increase in hurricanes as media headlines suggest.

Furthermore, Shellenberger pointed to NOAA data about increasing hurricane intensity. The numbers showed no evidence of an increase in the size of storms during the same time frame. From NOAA:

We conclude that the historical Atlantic hurricane data at this stage do not provide compelling evidence for a substantial greenhouse warming-induced century-scale increase in: frequency of tropical storms, hurricanes, or major hurricanes, or in the proportion of hurricanes that become major.

The study predicts a 5% increase in hurricane intensity by 2100, but so far there is no evidence of an increase up to this point. And this predicted intensity increase will happen as the overall numbers of hurricanes decrease.

What’s truly deceptive from the Times and other outlets is that they use the 1980s as the starting point from when they say hurricanes have increased. But the 1980s were a historic low point for hurricanes

Shellenberger concluded that much of the reporting on hurricanes has been an exercise in subtle and sometimes direct distortion of the truth. Numbers have been cherry-picked and the data has been misrepresented to concoct the narrative corporate media wants to present to the public.

“It’s clear that reporters are deliberately seeking to convince their readers and listeners of the false impression that hurricanes are becoming more frequent and intense,” he wrote.

It’s also important to note that while there has been more property damage from hurricanes, due to more people living in areas they commonly hit, there has actually been a sharp decrease in death and overall economic impact as a result of them.

Bjorn Lomborg, former director of the Danish government’s Environmental Assessment Institute in Copenhagen and a visiting fellow at the Hoover Institution, wrote in 2021 about how the world is getting better at mitigating the deadliness of hurricanes.

Even though the total damage due to hurricanes has gone up—mostly because more properties are in their way—the overall cost to societies has gone down.

“The trend of weather-related damages from 1990 to 2020 declined from 0.26% of global [gross domestic product] to 0.18%,” Lomborg wrote. “A landmark study shows this has been the trend for poor and rich countries alike, regardless of the types of disaster. Economic growth and innovation have insulated all sorts of people from floods, droughts, wind, heat and cold.”

It’s worth pointing out that the economic growth that’s allowed societies to better tackle the impact of hurricanes and other natural disasters was largely made possible by fossil fuels.

What’s more dramatic than the economic numbers is how much death tolls have gone down.

A century ago, Lomborg wrote, half a million people a year used to die in natural disasters like “storms, floods, droughts, wildfires and extreme temperature.” Since then, according to Lomborg, global annual deaths from natural disasters “declined 96%, to 18,000. In 2020, they dropped to 14,000.”

So if anything, the news is generally good, but you certainly wouldn’t guess this based on media coverage. Instead, we are led to believe that hurricanes are getting worse. If you don’t buy it, then you clearly don’t believe in capital “s” Science, according to the Left and its media allies.