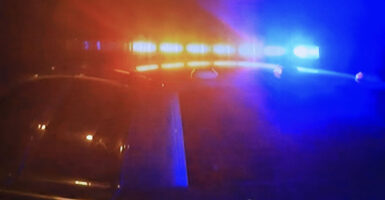 The Justice Department has charged 11 more pro-life activists with violations of the Freedom of Access to Clinic Entrances Act for blocking the entrance of an abortion clinic in 2021. (Photo: Getty Images)

Amid accusations that it is targeting pro-lifers to silence and intimidate, the Justice Department has charged 11 more pro-life activists with violations of the Freedom of Access to Clinic Entrances Act for blocking the entrance of an abortion clinic in 2021.

The 11 activists were charged with FACE Act violations stemming from their 2021 “blockade” of an abortion clinic in Mount Juliet, Tennessee. This blockade was peaceful, pro-life activist AJ Hurley told The Daily Signal on Wednesday evening.

Several of the activists were arrested on the day of the blockade, after reportedly successfully preventing abortions from taking place at the clinic for most of the day, but police reportedly released these activists later in the day after they posted bail for misdemeanor charges, the pro-life news outlet Live Action reported.

In a Wednesday press release, the United States Attorney’s Office for the Middle District of Tennessee announced that Chester Gallagher, 73, of Lebanon, Tennessee; Heather Idoni, 58, of Michigan; Calvin Zastrow, 57, of Michigan; Caroline Davis, 24, of Michigan; Coleman Boyd, 51, of Bolton, Mississippi; Dennis Green, 56, of Cumberland, Virginia; and Paul Vaughn, 55, of Centerville, Tennessee, are charged with “conspiracy against rights secured by the FACE Act, and committing FACE Act violations.”

Hurley, a pro-life activist who is friends with many of those charged on Wednesday, told The Daily Signal that the FBI raided Gallagher’s home on Wednesday morning with “guns drawn.” Hurley was not physically present but said he was alerted to the alleged raid by his friends.

Gallagher reportedly used social media to promote pro-life events scheduled for March 2021 in the Nashville area. His fellow pro-life activists, which the Justice Department release calls “co-conspirators,” used “Facebook to coordinate travel and logistics and to identify other participants for the blockade.”

Facebook did not immediately respond to a request for comment from The Daily Signal as to whether it provided intelligence related to the charges filed.

“On March 4, 2021, Coleman Boyd and Chester Gallager advertised the blockade of the Carafem Health Center Clinic, in Mount Juliet, Tennessee, which was planned for the following day,” the release said. “In his social media post, Gallagher referred to the blockade as a ‘rescue.’ Boyd also began a Facebook livestream broadcast of the clinic blockade at 7:45 a.m. on March 5, 2021.”

Hurley explained that a “rescue” means “to forfeit one’s own well-being in a peaceful attempt to save innocent life by placing oneself in between a victim and an oppressor.”

The release continued: “This livestream broadcast was titled, in part, ‘Mt. Juliet, TN Rescue March 5, 2021,’ and livestreamed the blockade event as his coconspirators and others blocked the clinic’s entry doors and prevented a patient and an employee from entering. The livestream also broadcast members of the group attempting to engage a patient and her companion as Boyd told his livestream audience that the patient was a ‘mom coming to kill her baby.’”

On March 5, 2021, according to the release, the pro-life activists, “aided and abetted by one another, used force and physical obstruction to injure, intimidate, and interfere with employees of the clinic and a patient who was seeking reproductive health services.”

The news comes amid national outcry over the dramatic arrest of Mark Houck, a Catholic father and pro-life activist who was reportedly dramatically arrested by armed FBI agents in front of his family for allegedly pushing a pro-abortion activist who allegedly harassed his son.

Neither the FBI nor the U.S. Attorney’s Office for the Middle District of Tennessee immediately responded to requests for comment from The Daily Signal.