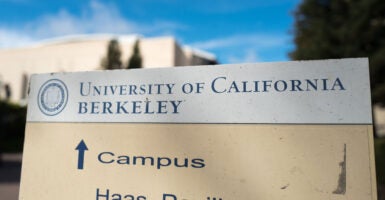 Nine law student groups at University of California, Berkeley have amended the bylaws of the university to ban any speakers who support Israel or Zionism. (Photo: Smith Collection/Gado/Getty Images)

The University of California, Berkeley is known for many things, some good and some very bad, even outrageous.

In 1964, a ban on campus political and religious activities launched what was called the free speech and academic freedom movement that quickly spread to other campuses. To many of an older generation, it quickly got out of hand.

During his run for governor in 1966, Ronald Reagan promised to “clean up the mess at Berkeley,” and end what had evolved from free speech to strikes related to the draft, civil rights, discrimination, and women’s liberation.

Whatever one’s view of the unrest at the time—liberals loved it and conservatives like Reagan vowed to stop it—what is happening now at Berkeley ought to shame especially those who believe in free speech and oppose discrimination.

Nine law student groups at the law school have managed to amend the university’s bylaws to ban any speakers who support Israel or Zionism.

Berkeley Law’s dean, Erwin Chemerinsky, a progressive Zionist, has observed that he would be banned under this standard, as would 90% of his Jewish students.

Berkeley law students are not the first to exclude Zionists. At the State University of New York at New Paltz, activists drove two sexual assault victims out of a survivor group for being Zionists. At the University of Southern California, they drove Jewish student government vice president Rose Ritch out of office, threatening to ‘impeach [her]’ … At Tufts, they tried to oust student judiciary committee member Max Price from the student government judiciary committee because of his support for Israel.

Despite his statement that he would be silenced under the change in bylaws, Chemerinsky responded to Marcus, claiming that not all student groups have banned pro-Israel and Zionist speakers. This prompted Marcus to counter: “Would it be OK for only 5% or 10% of the campus to be segregated? What percentage of the Berkeley campus should be open to all? Shouldn’t it be 100%?”

The question answers—or should answer—itself.

Marcus further rebuts Chemerinsky’s assertion of a campus that does not discriminate:

Chemerinsky misses the point when he insists that all clubs admit Jewish students as members. No one denies this. Nevertheless, an unmistakable signal is sent to those same students when they are told that they would be barred from appearing as invited speakers. This sends a clear signal: Jews are not welcome, unless they deny their support for Israel which, for many, is an integral element of Jewish identity.

What do students have to fear from hearing arguments on all sides of an issue? If a university does not protect free speech, it becomes an agent of censorship, even propaganda.

As antisemitism again rises in Europe and the United States, educational institutions should be teaching its history, not allowing a new strain to be promoted. Isn’t that the point of those who support critical race theory?

Especially with America’s history during World War II when the Roosevelt administration limited the number of Jews desperately fleeing Nazi Germany to enter this country, Berkeley and other students should be more welcoming to Jews, protect their free speech, and not silence them.