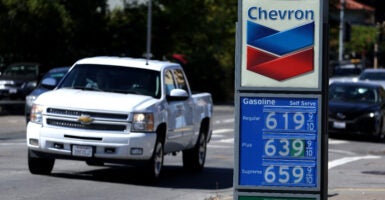 Although the price of oil has slipped back from recent highs, the factors behind high gasoline prices remain in place. Pictured: A gas station in San Rafael, California, Sept. 27. (Photo: Justin Sullivan/Getty Images)

Rupert Darwall is a senior fellow at RealClearFoundation, researching issues from international climate agreements to the integration of environmental, social, and governance (ESG) goals in corporate governance.

The West is experiencing its third energy crisis.

The first, in 1973, was caused by the near-quintupling of the price of crude oil by Gulf oil producers in response to America’s support for Israel in the Yom Kippur war. Their action brought an end to what the French call the Trente Glorieuses—the unprecedented post-World War II economic expansion.

The second occurred at the end of the 1970s, when Iran’s Islamic Revolution led to a more than doubling of oil prices. This again inflicted great economic hardship, but the policy response was far better. Inflation was purged at the cost of deep recession. Energy markets were permitted to function. High oil prices induced substitution effects, particularly in the power sector, and stimulated increased supply.

In the space of nine months, the oil price cratered from $30 a barrel in November 1985 to $10 a barrel in July 1986. It’s no wonder that the economic expansion that started under Ronald Reagan had such long legs.

This time is different.

The third energy crisis was not sparked by Saudi Arabia and its Gulf allies or by Iranian ayatollahs. It was self-inflicted, a foreseeable outcome of policy choices made by the West: Germany’s disastrous Energiewende that empowered Vladimir Putin to launch an energy war against Europe; Britain’s self-regarding and self-destructive policy of “powering past coal” and its decision to ban fracking; and, as Joseph Toomey shows in his powerful essay, President Joe Biden’s war on the American oil and gas industry.

Hostilities were declared during Biden’s campaign for the Democratic presidential nomination. “I guarantee you. We’re going to end fossil fuel,” candidate Biden told a climate activist in September 2019, words that the White House surely hopes get lost down a memory hole. Toomey’s paper has all the receipts, so there’s no danger of that.

As he observes, Biden’s position in 2022 resembles Barack Obama’s in 2012, when rising gas prices threatened to sink his reelection. Obama responded with a ruthlessness that his erstwhile running mate lacks. He simply stopped talking about climate and switched to an all-of-the-above energy policy, shamelessly claiming credit for the fracking revolution that his own Environmental Protection Agency tried to strangle at birth.

Passage of the comically mistitled Inflation Reduction Act places this option beyond Biden’s reach, even if he were so inclined. Democrats are hardly going to take a vow of climate omertà when they’ve achieved a political triumph of pushing through Congress what they regard as the most significant climate legislation to date.

Although the price of oil has slipped back from recent highs, the factors behind high gasoline prices remain in place. Foremost among these is the steep decline in U.S. oil refinery capacity triggered when COVID-19 lockdowns crushed demand but continued after the economy reopened. There has never been such a large fall in operable refinery capacity. Moreover, Gulf Coast refineries were operating at 97% of their operating capacity in June 2022. As Toomey remarks, “There isn’t any more blood to be squeezed out of this turnip.”

Toomey identifies five factors driving this decline in refinery capacity. EPA biofuel blending mandates impose crippling costs on smaller refineries. When conventional refineries are converted to processing biofuels, up to 90% of their capacity is lost.

Biden could order the reversal of the EPA’s retroactive biofuel threshold rules. That he has not done so demonstrates that the administration isn’t serious about making energy affordable again. High prices for fossil fuel energy are an intended part of the plan.

Corporate and Wall Street environmental, social, and governance policies are another factor driving refinery closures, especially of facilities owned by European oil companies to meet punishing decarbonization targets that will effectively end up sunsetting them as oil companies.

If finalized as proposed, the Securities and Exchange Commission’s proposed climate disclosure rules, with the strong support of the Biden administration, will heighten the vulnerability of U.S. oil and gas companies to climate activists and woke investors to force them to progressively divest their carbon-intensive activities, such as refining crude oil, and eventually out of the oil and gas sector altogether.

To these should be added aggressive federal policies aimed at phasing out gasoline-powered vehicles in favor of electric vehicles; an administration staffed from top to bottom by militants who believe that climate is the only thing that matters in politics; and an increasingly hostile political climate (“You know the deal,” Biden said of oil executives when campaigning for the presidency. “When they don’t deliver, put them in jail”).

These policies, argues Toomey, will see China become the world’s leading oil refiner for years to come. Will Biden find himself asking China for supplies of refined gasoline? He might well find himself being saved from such an unfortunate position, made more so by Speaker Nancy Pelosi’s recent trip to Taiwan, by help from the other side of the southern border.

Mexico is constructing a $12 billion refinery, due to start producing gasoline next year. Perhaps Biden’s next foreign trip should be to Mexico City.