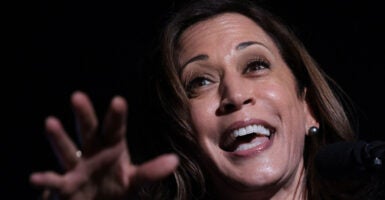 “It is our lowest-income communities and our communities of color that are most impacted by these extreme conditions and impacted by issues that are not of their own making," says Vice President Kamala Harris, pictured Oct. 21, 2021 in Dumfries, Virginia. (Photo: Win McNamee/Getty Images)

How is it that equity, a doctrine that tells government and the private sector to treat Americans differently because of their race, is becoming so pervasive in the Land of the Free?

One reason is the deliberate obfuscation of its meaning. Fortunately, every once in a while Kamala Harris comes along to remind us of what it truly is.

Displaying her inerrant tin ear and bad timing, the Veep chose this time the devastation that Hurricane Ian has caused to say that aid would be distributed according to race. Florida officials had to rush forward to deny that this was the case, lest already horrific conditions be made worse by confusion.

Harris left little room for misunderstanding, saying on Friday that, “It is our lowest-income communities and our communities of color that are most impacted by these extreme conditions and impacted by issues that are not of their own making. And so we have to address this in a way that is about giving resources based on equity, understanding that we fight for equality, but we also need to fight for equity, understanding not everyone starts out at the same place.”

She added, “And if we want people to be in an equal place, sometimes we have to take into account those disparities and do that work.”

“This is false,” tweeted immediately the rapid response director for Gov. Ron DeSantis’s reelection campaign, Christina Pushaw, referring to the idea that race would play a role on how aid was handed out. “[Harris’] rhetoric is causing undue panic and must be clarified. FEMA Individual Assistance is already available to all Floridians impacted by Hurricane Ian, regardless of race or background.”

Florida’s senior senator, Rick Scott, also took to social media to clear the air. “This is wrong and dangerous. Aid is distributed based on need, period. FL is strong and ready to undertake the long journey of rebuilding. We are in this together, and won’t let politicians like @KamalaHarris use race to divide us as we work to recover our lives and communities. Even Elon Musk felt the need to call out the injustice included,” tweeted Scott.

As indeed, the founder of Tesla had indeed had his own comment: aid, he said, “should be according to greatest need, not race or anything else.”

The Biden administration has, however, made race-conscious benefits the hallmark of its term, even though it is unconstitutional. Last week was not by no means the first time that Harris drew a sharp distinction between equity and the American ideal of equality. “There is a big difference between equality and equity,” she wrote fewer than two years ago.

It is indeed a core belief of Critical Race Theory that, because racial disparities exist, aid and benefits should be race-based and not limited to means-tested criteria. The foundational writings of CRT are filled with the promotion of racial-conscious policies that fall under the umbrella label of “equity.”

“This belief in color-blindness and equal protection,” writes Kimberle Crenshaw in a 1988 essay, “…make no sense at all in a society in which identifiable groups have been treated differently historically and which the effects of this difference in treatment continued to the present.”

Neil Gotanda goes right to the heart of the CRT argument when he writes in 1991, “Color-blindness strikes down Jim Crow segregation but offers no vision for attacking less overt forms of racial subordination. The color-blind idea of the future society has been exhausted.”

One problem for CRT enthusiasts such as Harris is that American society has decidedly moved away from having government or private enterprises dole out benefits or rights based on race. Race-conscious policies are dismally unpopular, with racial preferences university admissions polling at best 26% versus 74% against and other similar policies largely rejected.

The other problem is that policies based on race are clearly immoral and violate the Constitution and the Civil Rights Act.

And yet, businesses, schools and professional associations are falling all over themselves to compel their employees and members to conform to this ugly and unpopular views, by for example forcing them to sign Diversity, Equity and Inclusion statements, or face disciplinary measures, or worse.

Americans are fighting back. Last week, Jonathan Haidt, a liberal who is a professor at New York University, announced he would resign from the Society for Personality and Social Psychology, the only professional organization he belongs to, because it has instituted a requirement that everyone presenting research explain how their work advances “equity, inclusion, and anti-racism goals.”

It takes courage for Americans to buck the tide of DEI (diversity, equity and inclusion), but they shouldn’t be alone. Until the federal government is in different hands, the 50 states should be passing bills which make it clear that discrimination is illegal, as is compelling a belief on such discrimination, and prosecuting violators.

Until then, we can rely on Harris to remind us occasionally what exactly equity entails, and why it must be opposed.