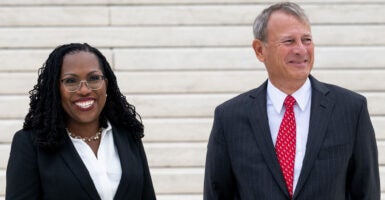 Was the Supreme Court's 2021-2022 term a mere blip on the radar, or the beginning of a broader, meaningful conservative legal restoration? Pictured: After her investiture ceremony Friday, Justice Ketanji Brown Jackson poses with Chief Justice John Roberts on the steps of the Supreme Court in Washington. (Photo: Saul Loeb/AFP/Getty Images)

The Supreme Court begins hearing cases for its new term Monday, following its customary summer recess. If this term is anything like the last one, conservatives and constitutionalists will rejoice.

Now, with such grotesque precedents as Roe v. Wade and Lemon v. Kurtzman properly overturned, will the Supreme Court continue to move rightward? Put another way, was the 2021-2022 term a mere blip on the radar, or the beginning of a broader, meaningful conservative legal restoration?

Although it is unclear, and there are fewer “culture war”-centric cases on the docket this term than last, there is still reason for cautious optimism in some of the marquee impending cases.

The two cases had been “consolidated,” meaning they were to be decided in unison, before then being “de-consolidated” to permit Justice Ketanji Brown Jackson—who will have to recuse herself from the Harvard case—to participate in at least one of them. But the legal issues are effectively identical, so the two cases should come out the same way.

The court most recently upheld race-conscious university admissions policies in the 2003 case of Grutter v. Bollinger, in which Justice Sandra Day O’Connor’s majority opinion explicitly stated that “race-conscious admissions policies must be limited in time,” and added that the high court “expects that 25 years from now, the use of racial preferences will no longer be necessary to further the interest approved today.”

In fact, not only did the Grutter court presciently telegraph its own ruling’s possible demise in the twin Students for Fair Admissions cases, but affirmative action is also one rare area where even Chief Justice John Roberts has shined as a voice of sanity.

The ultimate cherry on top would be if Justice Clarence Thomas, a longtime archfoe of race-conscious admissions policies, writes the majority opinions in the two SFFA cases, formally overturning both Grutter and 1978’s Regents of the University of California v. Bakke and thus sending “systemic racism” to the ash heap of history. Hopefully, Thomas gets that opportunity.

But in Masterpiece Cakeshop, a court majority led by Justice Anthony Kennedy issued an extremely narrow ruling that redounded to Christian cake baker Jack Phillips’ case-specific free exercise interest, but failed to render a constitutionally meaningful judgment about the thorny intersection of nondiscrimination law, freedom of speech, and freedom of religion.

The fact that the high court granted certiorari in 303 Creative LLC and opted to hear the case, especially coming so soon after Masterpiece Cakeshop and due to the court’s notable personnel changes since 2018, strongly suggests that the court is prepared to issue a more sweeping ruling.

Here, that would entail ruling in favor of Lorie Smith’s claim that her creation of a wedding planning website is constitutionally tantamount to “pure speech”—and that her website’s commercial activity thus falls under the First Amendment’s strong protective ambit.

Judge Timothy Tymkovich of the 10th Circuit wrote a powerful and inspiring dissent last year, when this case reached his appeals court panel; that dissent could, and should, serve as a template for the Supreme Court’s majority opinion. Such a majority opinion in 303 Creative LLC would represent the court’s long-overdue constitutional validation of religious dissenters’ claim, at least on grounds of compelled speech doctrine, from the oppressive forces of “wokeism” and gender ideology.

A similarly definitive pro-religious liberty ruling on the intersection of nondiscrimination law and free exercise of religion—in particular, the possible overturning of the contested 1990 case, Employment Division v. Smith—will still wait for another day.

There is less red meat on the docket this Supreme Court term than there was last term, but there is still plenty ahead to which to look forward. Above all, the demise of the monstrosity that is modern America’s racist affirmative action regime would be an epochal step in bringing America closer in line with her noble, race-neutral founding ideals.