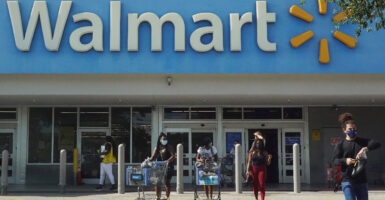 The Federal Trade Commission has filed suit against Walmart, but the retail giant is firing back. Pictured: Shoppers leave a Walmart store on May 18, 2021, in Hallandale Beach, Florida. (Photo: Joe Raedle/Getty Images)

Joseph Postell is associate professor of politics at Hillsdale College and a visiting fellow in the B. Kenneth Simon Center for American Studies at The Heritage Foundation. He is the author of the book “Bureaucracy in America: The Administrative State’s Challenge to Constitutional Government.”

It looks like Walmart and the administrative state are going to court. The case has the potential, however, to affect not only Walmart, but also the entire federal bureaucracy.

The Federal Trade Commission has sued the retail giant, seeking civil penalties in what Walmart is calling “an egregious instance of agency overreach” undertaken in spite of a “lack of constitutional or statutory authority.”

The FTC alleges that Walmart did not do enough to protect its customers from scams run by money-transfer services offered inside the company’s stores.

Walmart has responded to the FTC’s lawsuit by challenging the agency’s very constitutionality, and its argument could affect the legal status not only of the FTC, but of other agencies across the administrative state.

In other words, Congress created the FTC as a multimember, independent regulatory commission, whose leadership would be insulated from the president’s political control. The president cannot fire the heads of the agency over mere political disagreements.

The creation of these independent regulatory commissions weakens this aspect of the Constitution’s design to keep the government accountable to the people.

This isn’t the first time the removal of FTC commissioners has been contested. In a famous Supreme Court decision in 1935, Humphrey’s Executor v. United States, the justices upheld this way of insulating FTC commissioners from the president’s authority.

The case involved William Humphrey, a commissioner at the FTC who was appointed by President Herbert Hoover, yet still served after Franklin Roosevelt was elected in 1932. He opposed the New Deal and used his power at the FTC to obstruct it.

FDR asked him to resign several times, and each time, Humphrey refused to leave.  Finally, Roosevelt simply removed him from office.

Humphrey sued for the back pay he was owed because he was unlawfully fired. The Supreme Court unanimously ruled for Humphrey, who had since passed away and was represented by the executor of his estate.

In a remarkable opinion, the court claimed that the FTC was not an executive agency, but a “quasi-legislative” and “quasi-judicial” committee that “cannot in any proper sense be classified as an arm or an eye of the executive” branch.

The FTC’s quasi-legislative and quasi-judicial powers meant that it belonged not in the second branch of government, headed by the president as chief executive.  Thus, it was OK for Congress to limit the president’s ability to fire the heads of that agency.

The Humphrey’s Executor decision legitimized an entire array of federal agencies that are not accountable to the president. Roosevelt—of all people—declared that these independent regulatory commissions “threaten in time to become a headless fourth branch of government, not contemplated by the Constitution, and not responsible administratively either to the President, to the Congress, or to the Courts.”

Humphrey’s Executor has long been criticized by those who think the Constitution establishes three branches of government and does not legitimate a fourth branch, where administrative agencies exercise “quasi-legislative” and “quasi-judicial” power.

The very notions of quasi-legislative and quasi-judicial power seem to be in tension with the Constitution. As Justice Robert Jackson wrote in an opinion in 1952, independent regulatory commissions have “deranged our three-branch legal theories.” The court’s “retreat to the qualifying ‘quasi’ is implicit with confession that all recognized classifications have broken down,” he argued, “and ‘quasi’ is a smooth cover, which we draw over our confusion as we might use a counterpane to conceal a disordered bed.”

Walmart’s lawsuit suggests that the notion of the fourth branch may be in trouble. In a 2021 decision, Seila Law v. Consumer Financial Protection Bureau, the Supreme Court clarified its decision in Humphrey’s Executor. It declared that the decision only allows certain kinds of agencies to be exempted from the president’s constitutional removal power.

Those agencies, the court wrote, must exercise no part of the executive power, and must be nonpartisan, multimember boards composed of experts. All agencies that do not meet those criteria must be subject to the president’s removal authority.

The problem for the FTC is that it does have executive power. In amendments passed by Congress in the 1970s, decades after Humphrey’s Executor was handed down, the FTC was given the power to seek civil penalties and consumer redress in federal court—a quintessential executive power of prosecution.

That power, even according to Humphrey’s Executor, can only be in the hands of someone who is accountable to the president. Thus, the FTC’s use of that power, according to Walmart’s lawsuit, is unconstitutional.

If Walmart prevails, the consequences would be significant, not only for the FTC, but for a vast number of other administrative agencies.

Some of our most powerful administrative agencies are independent regulatory commissions, such as the Securities and Exchange Commission, the Federal Communications Commission, and the National Labor Relations Board. If all of their executive powers are unconstitutional, the fourth branch of government may lose a significant amount of its independence from the president.

For those who think the Constitution creates three branches of government rather than four, that would be a welcome change.