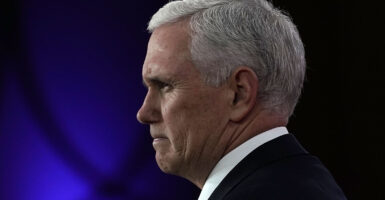 Former Vice President Mike Pence’s Advancing American Freedom is leading a conservative coalition in demanding Justice Department records about the “ongoing attacks against pro-life organizations”—and whether the Justice Department is ignoring them.

In a Freedom of Information Act request first obtained by The Daily Signal, Advancing American Freedom, Americans United for Life, Catholic Vote, Heritage Action for America, Susan B. Anthony Pro-Life America, and a slew of other conservative organizations suggest the Justice Department is purposefully failing to address these attacks. (The Daily Signal is the news outlet of The Heritage Foundation)

“We have serious concerns that the work of DOJ is being inappropriately politicized, as investigations into these acts of violence against organizations disfavored by the current administration are being slow-walked or outright ignored,” the organizations said. “The execution of justice requires fair and equal treatment under the law here, regardless of the Biden administration’s sympathies.”

According to Catholic Vote trackers, at least 73 pregnancy resource centers and organizations as well as at least 83 Catholic churches have been attacked since the infamous leak of the draft Dobbs v. Jackson Women’s Health Organization opinion showing that Roe v. Wade would be overturned.

FOIA Request to DOJ on Viol… by Mary Margaret Olohan

The FOIA request notes that pro-life organizations have been “threatened, their buildings vandalized, defaced, and even firebombed” as “extremist groups” continue to call for violence and “gleefully” take credit for “these wicked actions.” The letter specifically flags Nicholas Roske, who traveled across the country with the stated attempt to kill Supreme Court Justice Brett Kavanaugh.

“This continued assault against pro-life Americans, pro-life institutions, and even the Supreme Court of the United States is a manifest injustice that requires a prompt, comprehensive, and public response,” the letter notes. “These coordinated acts of domestic terrorism and political intimidation are flagrant violations of the Ku Klux Klan Act of 1871, which prohibits any conspiracy to interfere with a
federal official from discharging his duties … “

Advancing American Freedom and the other organizations reiterated their calls for the Justice Department to publicly condemn these “unlawful acts” and to commit to vigorously preventing, investigating, and prosecuting them. They also noted that they have previously asked for a meeting with the Civil Rights Division to discuss plans to “ensure that these attacks never happen again.”

“Our United States Constitution was established ‘in Order to form a more perfect Union, establish Justice, insure domestic Tranquility,’” the signers said. “When violence against pro-life organizations goes unpunished, the commitment to a more perfect union is subverted. When investigations are delayed, justice is denied. And when Americans have to live in fear for exercising their First Amendment rights in advocating for pro-life principles, domestic tranquility is destabilized.”

The FOIA request comes a week after the FBI arrested Mark Houck, a pro-life activist and father of seven who has been accused of pushing an abortion clinic volunteer. The incident, which took place early in the morning as armed agents arrested him in front of his screaming children, according to his wife, has stunned conservatives and prompted sharp rebukes from GOP lawmakers.

Authorities have charged Houck with violating the Freedom of Access to Clinic Entrances Act, which criminalizes the use of force to intimidate or obstruct someone from getting or providing an abortion. On Tuesday, the father of seven plead not guilty to two counts, Fox News reported.

Rep. Jim Jordan, R-Ohio, suggested to The Daily Signal earlier this week that the FBI’s dramatic arrest of Houck is “just a continuation” of the bureau’s “political nature”—”labeling everyone an extremist to satisfy the Biden narrative. “

“And the latest victim, of course, is this family who gets the door kicked in with agents’ guns drawn, for a guy that local courts and police had said there was no real case there at all,” he added.

“Time after time we see this where they’re so aggressive in going after these ‘extremist domestic violence’ cases all over the country,” Jordan added of President Joe Biden’s Department of Justice. “And that’s how they view people who are pro-life, showing up and praying in front of abortion clinics. They view them as extremists when obviously this family is just a good family.”