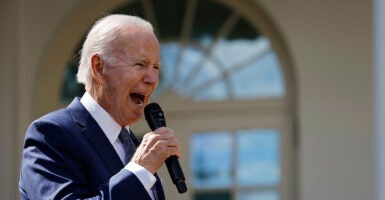 President Joe Biden's uncertain, dithering, wrong-headed decisions and outright lies on everything from the COVID-19 pandemic to the catastrophe on our southern border, inflation, and errant energy policy inflict real pain on the American people. Pictured: Biden delivers a speech at the White House Sept. 27, 2022. (Photo: Chip Somodevilla/Getty Images)

Conservative political pundits love to air videos of Old Joe’s erratic, often unintelligible remarks. There are sure to be “replays” of many of these in campaign commercials during the nonstop run-up to the 2024 elections.

President Joe Biden’s uncertain, dithering, wrong-headed decisions and outright lies on everything from the COVID-19 pandemic to the catastrophe on our southern border, inflation, and errant energy policy inflict real pain on the American people. But all these pale in comparison to his cognitive disarray on matters of national security. Presidential weakness in thought, word, and deed when dealing with “near peer adversaries” could well result in war.

For the good of our republic, Biden’s handlers should avoid placing our sadly compromised commander in chief in situations where his meandering mind compromises the security of our nation.

His Sept. 18 appearance on “60 Minutes,” where all hands were starry-eyed sycophants, is but one recent example. Host Scott Pelley asked, “So unlike Ukraine, to be clear, sir, U.S. forces, U.S. men and women, would defend Taiwan in the event of a Chinese invasion?” Biden answered, “Yes.”

Afterward, CBS posted in the online transcript of the “60 Minutes” fiasco, “After our interview a White House official told us U.S. policy has not changed. Officially, the U.S. will not say whether American forces would defend Taiwan. But the commander-in-chief had a view of his own.”

We are not alone in wondering, who is running the U.S. government?

Since then, Russian President Vladimir Putin has again warned about using “all necessary means [code words for nuclear weapons] to defend Russian homeland.” On the edge of winter, he has shut down the Nord Stream 1 natural gas pipeline to Europe, called up at least 300,000 “reservists” for duty in his thus far failed invasion of Ukraine, and is now asserting a phony “referendum” affirming Russian annexation of Ukrainian territory.

Meanwhile, Putin is facing unprecedented protests across Russia against horrific casualties in Ukraine, draft dodgers fleeing the country, increasing unemployment, shortages of food and basic necessities, and a pro-nationalist revolt against a prisoner of war swap with Ukraine.

Putin is on the ropes. His only hope is to hang on through the winter while fighting a war of attrition against the Ukrainian people. And the only “world leaders” who can save him are Chinese President Xi Jinping in Beijing and Biden in Washington.

Our goal should be for Ukraine to restore all its territory and national sovereignty. Xi is waiting to see what ensures Taiwan being recognized as part of Communist China with the least possible cost to the Chinese Communist Party.

Biden, timorous at best, flaccid and confused at worst, does not seem to understand the disastrous consequences of appearing weak. After Putin’s thinly veiled nuke threats, Biden’s undersecretary of defense for policy, Colin Kahl, said, “Ukraine’s success on the battlefield could cause Russia to feel backed into a corner, and that is something we must remain mindful of … “

That’s precisely the kind of weak thinking behind Biden’s disastrous withdrawal from Afghanistan. It’s part of his abysmal decision to reopen “talks” with Iran on building nuclear weapons and the means of delivering them on Israel and the United States. As pointed out in our last column, it was this president’s muddled mind that turned the brightest and bravest military force in world history into demoralized Woke Social Justice Warriors.