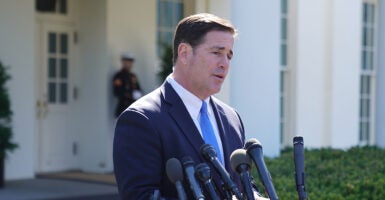 A teachers union-backed interest group in Arizona is attempting to block a state education choice measure through a referendum campaign.

The education savings account program, signed into law by Gov. Doug Ducey, a Republican, in July, would have taken effect Saturday. The law’s implementation is currently on hold.

Arizona Secretary of State Katie Hobbs, the state’s Democratic candidate for governor, had 20 business days since the bill would have taken effect to review signatures on the referendum petitions.

The opponents of school choice, Save Our Schools Arizona, filed their petition “as soon as the funds would’ve come to us,” an Arizona mother of four, Annie Mead, told The Daily Signal in a phone interview. Mead homeschools her three younger children and enrolled her oldest in a charter school, she explained. She applied for an education savings account in August, and it would have been effective Saturday.

“If Secretary Hobbs … would verify that they don’t have the petition quantity, then we could move forward with releasing those funds,” said Mead. “Now we’re waiting longer, when they could’ve just been honest last week, and it would’ve gotten things activated.”

The parents of nearly 11,000 students have filed new education savings account applications, which are now on hold. About 100 of those students and parents gathered outside the secretary of state’s office in Phoenix on Wednesday to protest the prospect of a referendum.

The Empowerment Scholarship Accounts program (HB 2853) offers up to $7,000 in funds for K-12 Arizona students. Families and students who take part in the program can use those funds for tuition and related expenses for almost any schooling option of their choosing.

Arizona Senate President Karen Fann wrote in a Wednesday letter to Hobbs, “It’s our understanding that the referendum attempt on HB 2853 did not receive the required number of signatures needed to make it on the ballot.”

Arizona’s ballot initiative law allows a group that has gathered enough signatures (5% of voters in a gubernatorial election) to seek repeal via referendum of a law that passed through the Legislature and was signed by the governor. In effect, that blocks implementation of a law until Arizonans vote for or against it in the November gubernatorial elections.

Mead and other school choice advocates find it concerning that a small group of teachers unions and their supporters can co-opt the legislative process.

Yet, Save Our Schools Arizona Executive Director Beth Lewis admitted Monday that the group will likely fall short of the number of signatures required to put the law on the ballot. As the Arizona Mirror reported, “The concession is a stark reversal: On Friday, the group declared that it was confident that it had ample petition signatures to force the referendum on the law, claiming it had gathered 141,714.”

The news outlet noted, “That estimate disintegrated—and, along with it, the likelihood that the effort to challenge the expansion to Arizona’s Empowerment Scholarship Account program would make the 2024 ballot.”

As Fann wrote in her letter to the secretary of state on Wednesday, “If the referendum proponents had accurately stated that they had not reached the signature threshold needed at the time of filing, your office would have been obligated to immediately disqualify the referendum from the ballot.”

According to 2022 guidelines on initiative and referendum, Fann notes, the secretary of state must reject the entire referendum if the number of signatures is lower than the constitutional requirement at the time of the filing of the petitions.

Fann argues referendum proponents’ “incorrect and inflated reporting” has suspended the “effective date of a duly enacted law.” She urged Hobbs to speed up the review process, as confusion has arisen. If a family is to qualify for the first quarter of Ducey’s universal school voucher program, they must apply by Friday. Families will miss out on Quarter 1 funding if they don’t meet that deadline. But now, new applicants for universal education savings accounts are on hold, according to the Arizona Department of Education.

As Mead noted, Arizona lawmakers have been generally favorable to school choice. “Medically and educationally, we are the best people to make decisions for our children,” she explained, noting the state’s lawmakers generally trust parents.

“Even the homeschool laws are written in a way that I am the primary decisionmaker, and I’m accountable … for my children’s education,” she added. “I appreciate that they respect me to make the boundaries, and me to make the decisions, that I know my child best.”

Save Our Schools Arizona did not respond to The Daily Signal’s request for comment as of the time of publication.