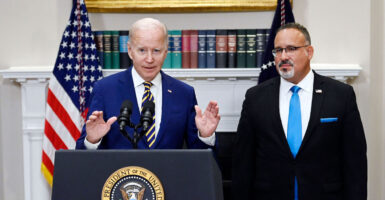 The lawsuit by the six states follows another one filed by the Pacific Legal Foundation on behalf of an individual borrower.

Biden and Education Secretary Miguel Cardona claimed to find authority for canceling some student loan debt in the 2003 HEROES Act, passed after the 9/11 terror attacks. That statute permits the secretary of education to act only when necessary to keep borrowers from being worse off with respect to their student loans as a direct result of an emergency.

But in this case, Cardona made no effort to identify and tailor relief to affected borrowers. Instead, he set income thresholds as the sole criteria to qualify for debt cancellation ($125,000 for individuals and $250,000 for couples), which tell us nothing about whether those individuals suffered any financial harm from the COVID-19 pandemic.

Because Biden’s education secretary knowingly is granting relief to millions of individuals who do not qualify, his actions unlawfully exceed the scope of the HEROES Act.

Moreover, it is doubtful that the HEROES Act authorizes mass debt cancellation under any circumstances. Just three months ago, the Supreme Court reminded government agencies such as the Department of Education that when they assert new, transformative authority over politically and economically significant questions, they must point to a clear statement from Congress authorizing it.

Since the HEROES Act was enacted 19 years ago, no education secretary has used it to cancel student loan debt. That is because that law nowhere contemplates debt cancellation, meaning it does not provide the required clear statement.

Thus, it is highly doubtful that Congress gave the education secretary the debt-canceling authority that Biden now claims.

The harder question is who has standing to sue over Biden’s action. Standing is a legal doctrine that says you can’t sue someone unless they’ve caused you a concrete injury that the courts have the power to fix.

The brazen illegality of Biden’s loan forgiveness plan suggests that he was confident that nobody could sue him over it. The president’s confidence was overinflated.

The individual borrower who filed suit earlier this week, Frank Garrison, argues that he has standing because Biden’s plan will saddle him with a large tax liability. His loans already are going to be forgiven under a different program for those who work in public service jobs.

This argument probably would have passed muster, but for the fact that the Education Department announced that borrowers such as Garrison will be able to opt out of the loan forgiveness. That action weakens his argument significantly.

But the six states that filed suit against the Biden administration have some stronger arguments.

Missouri, for example, operates public entities that service or own student loan debt. Servicers such as the Missouri Higher Education Loan Authority are legally and contractually obligated to pay all of the administrative costs associated with servicing loans.

This obligation includes communicating with borrowers, tracking payments, evaluating whether borrowers qualify for various deferral or forgiveness programs, providing borrowers with all the information they need to make decisions about their loans, and reporting all this information to the federal government. This means that whenever the administration makes a change to loan programs—such as Biden’s forgiveness plan—the servicers bear huge administrative costs.

In exchange for all their work, servicers are paid a small amount of money per month per loan. Biden says he is going to completely forgive almost half of all student loans. That’s half of the servicers’ income gone.

These are all economic harms that the states bear as participants in the servicing market.

Additionally, states use the money made by their servicers to invest in other state programs. When servicers such as the Missouri Higher Education Loan Authority lose money, those state programs lose money too. The Supreme Court has held that states have standing to protect those types of interests.

Other states, such as Arkansas, operate public entities that own federal student loan debt. The Arkansas Student Loan Authority, for example, gets paid based on how many loans it holds.

Biden just announced that he isn’t going to forgive the kind of loans held by the Arkansas Student Loan Authority, but that doesn’t matter. Ever since Biden announced his plan, borrowers have been converting those loans into ones that are forgivable.

This development has decreased the number of loans that the Arkansas authority holds, and therefore its revenue. This, in turn, means that the authority has less money to invest in the state, including programs to fund more student loans for Arkansas residents.

Still other states, such as Nebraska, invest their state pension funds in securities backed by student loan assets. Biden’s loan forgiveness plan will cause investors in those securities to receive their money back earlier than anticipated, which will reduce their income streams. It also may cause the market for these securities to decline, lowering the value of Nebraska’s investments.

It’s not the strongest argument, but the others should be enough to get the plaintiffs into court.

The six states that sued are not the only ones that could. Other states, among them Oklahoma and Pennsylvania, have their own loan servicers and thus also have standing.

Hopefully they’ll join in soon. Time is running out because Biden’s plan may forgive loan debt automatically for 8 million borrowers in the next week or two.

Regardless, it’s great to see solid challenges to Biden’s scheme. We may not be able to instill in this president a respect for the rule of law, but at least we can stop him profiting from his lawlessness.