‘Never Had FBI Agents Show Up on the Sidewalk Before’: Pro-Life Group Claims FBI Questioned Volunteer By Planned Parenthood 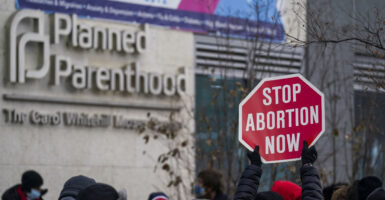 In an email obtained by The Daily Signal, Pro-Life Action Ministries Executive Director Brian Gibson put members on high alert about “a new effort by the Biden Justice Department to intimidate us all from the important work we do to save lives.”

Gibson referenced the FBI’s Friday arrest of Mark Houck, a Catholic father and pro-life activist accused of pushing an abortion clinic volunteer in Pennsylvania, though a spokesperson for the family told The Daily Signal that Houck “was defending his son from a man who was verbally abusing his son.”

“We have had a couple recent incidents locally in which a sidewalk counselor or prayer supporter had a physical altercation on the sidewalk,” Gibson told members in the Tuesday email. “Two FBI agents came out to the sidewalk outside Planned Parenthood in St. Paul today to talk to the prayer supporter involved in one of these incidents.”

In a Wednesday phone interview with The Daily Signal, Gibson shared that on May 16, a female Planned Parenthood client allegedly began cutting up a pro-life sign outside the clinic with a box cutter. An activist urged her to stop, he said, and she went back into the clinic.

“When she came back out, probably about an hour later, there was a man who comes and prays every day kneeling down, and he was kneeling down near the sign praying,” the pro-life leader explained. “And the woman went back after the sign to finish what [she] started.”

The activist pushed her away, Gibson said, and the abortion clinic escort fell down.

“He got charged with assault in state court in Minnesota,” Gibson continued. “All charges were dismissed because they didn’t have a case. I mean, she was a woman wielding a weapon and he’s trying to prevent her from doing physical harm. And that’s the individual the two FBI agents wanted to speak to yesterday came on our sidewalks. And I’ve been doing this for more than 40 years. I’ve never had FBI agents show up on the sidewalk before.”

The Daily Signal was not able to independently confirm the assault charges or that the charges were dropped.

Gibson told The Daily Signal that he learned about the incident from another activist and did not witness the events himself. Neither the Planned Parenthood nor the St. Paul Police Department immediately responded to requests for comment from The Daily Signal.

Gibson himself did not see the FBI agents at the abortion clinic, but The Daily Signal also spoke with Lucy Maloney, a pro-life activist who said she saw two female agents come to the clinic on Tuesday and engage in discussions with clinic workers and with the pro-life activist (or “prayer supporter,” as she described him) who had been engaged in the box-cutter incident.

“They didn’t talk to me or the other side walk counselor,” Maloney said. “They went straight to the prayer supporter that was out there, who was kneeling and praying. And they talked to him for a while and then they went back to their cars.”

“They stopped and talked with escorts,” she continued, referring to the abortion clinic workers, “for a minute or two before they went back to their cars.”

After the agents left, Maloney said the prayer supporter told her friend that they were FBI. She also said she did not witness the box-cutter incident.

In his email to the members of his organization, Gibson urged members to be “in deep prayer before, during, and after our presence on the sidewalk.”

“It also seems very clear that the focus is pro-life people who have physically defended others (or signs),” he continued. “This is why we continue to admonish everyone to never touch anyone while you are on the sidewalk.”

“If someone pushes you or hits you, defend yourself by walking away and calling the police,” he continued. “Do not push back. Be extra careful not to interfere with those driving or walking into the abortion facility.”

The FBI national office did not immediately respond to requests for comment from The Daily Signal, and FBI Minneapolis Public Affairs Officer Cyndi Barrington would not confirm that agents went to the clinic, saying, “per policy, the FBI neither confirms or denies an investigation.”

The FBI’s arrest of Houck, conducted at 7 a.m. on Friday in front of his screaming children, according to his wife, has sparked national outrage from conservatives and pro-lifers who insist that the Justice Department is being weaponized against President Joe Biden’s political opponents.

Catholic Vote President Brian Burch told The Daily Signal this week that the Justice Department has “made clear that partisan political ideology is now driving its decision making, not equal justice under the law.”

“Our chief federal law enforcement agencies have utterly failed to protect the safety and integrity of Catholic churches, pregnancy resource centers, and even the private homes of Supreme Court justices,” he said. “Instead the Department has weaponized its agents to intimidate and pursue pro-life religious Americans.”

Burch noted that his organization has repeatedly called on both the Justice Department and the FBI to protect religious institutions and pro-life groups from “pro-abortion domestic terrorism” as “more than 150 attacks on Catholic churches and pro-life organizations—just since May— have gone unanswered.”

Editor’s note: This article has been corrected to reflect that it is alleged a Planned Parenthood client used box cutters to cut up a pro-life sign.