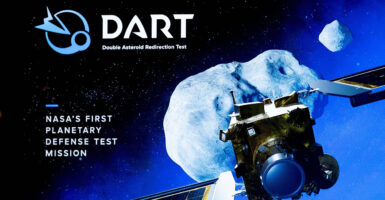 NASA successfully conducted a test Monday in which the agency deliberately ran a spacecraft into the smaller of two asteroids to alter the trajectory of that asteroid.

NASA’s spacecraft did so under autonomous guidance. That is, the spacecraft wasn’t guided into the moonlet Dimorphos by human hands, but instead found its target and (per preset mission parameters) then guided itself into the asteroid.

What’s more, Dimorphos is a relatively small celestial body, about 560 feet across. Given the high speed of NASA’s spacecraft, it required extremely precise targeting by onboard systems to hit the asteroid on the first pass.

The test was conducted as part of “planetary defense” experiments. Space is filled with dangerous objects that have the potential to extinguish life on Earth.

Recent years have seen some incidents involving exploding meteors, including over Utah, Pennsylvania, and Russia. Luckily, none of these incidents has led to fatalities on the ground.

The DART mission is a first step toward ensuring that humanity will not meet the same fate as the dinosaurs.

At the same time, this array of technologies has potential uses in other fields, such as hypersonic bodies and autonomous guidance.

Both NASA and America’s aerospace industrial complex have demonstrated, through this successful test, capabilities that are rapidly maturing—whether for planetary defense or more mundane aerospace applications.