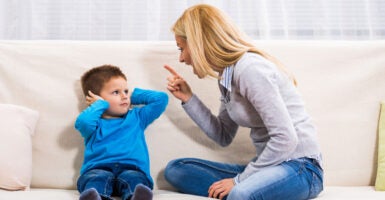 Moral stability—that is, civilization—is dependent on parental authority. Once that breaks down, it sets off a domino effect. (Photo: LittleBee80/ iStock/Getty Images)

As most Americans now realize, America is experiencing a societal breakdown.

This should be obvious to anyone, even those facilitating this breakdown as they openly acknowledge they seek to break down American society.

This is a society that teaches its youngest citizens a suicidal lie: that America was founded in 1619, that it was built on slavery, and that even today it is systemically racist. At the same time, it does not teach the fundamental moral fact that every culture practiced slavery—Arab, Muslim, African, Asian, Native American—and usually more viciously than in America (e.g., Arab slave masters routinely castrated black slaves so that they could not reproduce).

This is a society that robs its youngest of sexual innocence. Teachers—nearly all of them women, the sex that society has always regarded as the natural guardians of sexual innocence—now routinely sexualize young people with discussions of sexual behavior and by having drag queens perform for them.

This is a society that has taken as a given that there are more than two sexes; that has Jewish and Christian clergy sign emails with “preferred pronouns”; that will praise the Disney Corp. for dropping all references to “boys and girls” from its theme park announcements.

This is a society in which refusing to say that men give birth can lead to social banning and the loss of one’s job and income.

This is a society that encourages violent crime. It elects prosecutors who allow violent criminals to avoid having to pay bail. Its elites advocate defunding police. It keeps raising the dollar amount of stolen goods that constitutes a felony. In short, America is now a society in which the dominant message to would-be criminals is that crime pays.

This all began with the demise of moral authority—and moral, social, and intellectual chaos is the inevitable result.

Prior to the 1960s, America had moral authority—God, country, parents, the Bible, teachers, police, and clergy.

Not one of them is a normative authority today.

Starting in the 1960s, each one was overthrown. The ’60s motto “Never trust anyone over 30” perfectly embodied this—given that every one of those was older than 30. Soon, teachers were called by their first names and frequently talked back to, even cursed; on college campuses, “America” was often spelled “Amerika,” and the flag is now declared a symbol of white supremacy; police were referred to as “pigs”; clergy were rendered irrelevant; the American motto, “In God we trust,” was ignored or mocked; and the Bible went from the dominant book in American life to the trash heap of history.

Moral stability—in other words, civilization—is dependent on parental authority. Once that breaks down, all the others mentioned here also break down.

If you look at the two tablets of the Ten Commandments, you will notice that each tablet has five commandments. The first five are laws between man and God, while the second five commandments govern behavior toward fellow human beings (do not murder, steal, etc.).

Taking the second tablet first, the four commandments that precede the 10th depend on obedience to the 10th Commandment. When people murder, commit adultery, steal, or offer false testimony, it is almost always because they “covet” what their neighbor has—his property, his animals, his spouse.

Likewise, the first four commandments regarding God as the One Moral Authority rest on people obeying the Fifth Commandment: “Honor your father and mother.”

Today, elementary schools and high schools work to diminish all parental authority. The most obvious example is hiding from parents that their 10-year-old says he or she is not their biological sex. And should a parent tell his or her 10-year-old, “This is not so, you were born a boy and you are a boy,” or, “You were born a girl and you are a girl,” those parents run the risk of having the child taken away from them, not to mention severe condemnation from doctors, psychotherapists, and social workers.

The bottom line is this: When parents don’t rule the home, chaos will rule society. And chaos always breeds tyranny. So, the choice is stark—either we have strong parents, or we will have a strong state.