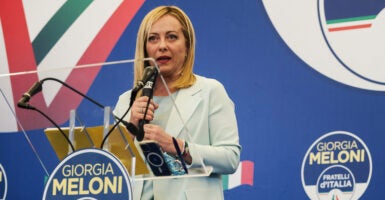 Unprecedented fall elections in Italy on Sunday led to a significant shift in the government, which will almost certainly see Giorgia Meloni, head of the relative newcomer political party Brothers of Italy, take over as the nation’s first female prime minister.

Brothers of Italy won the most seats in parliament, after securing about 26% of the vote, and her center-right coalition will have control of both the Chamber of Deputies and the Senate. In the lower house, the center-left Democratic Party came in second with about 19% of the vote, the populist 5-Star Movement third with over 15%, the nativist League (Lega) came in fourth, and the center-right Forward Italy party of former Prime Minister Silvio Berlusconi came in fifth, with both Lega and Forward Italy winning over 8%.

Brothers of Italy’s upward trajectory has been swift: The party won a mere 4.3% and 4.4% of the vote for the Senate and Chamber of Deputies, respectively, in the last general election in 2018, before coming out on top in Sunday’s snap elections.

Meloni is expected to form a conservative government alongside Lega and Forward Italy. The vote share of the combined parties means that the government has the potential to be Italy’s most stable in recent memory.

Much will depend on Meloni’s ability to bring her likely soon-to-be coalition partners to heel. Undoubtedly, discussions are already well underway as to what a coalition would look like, with the all-important wrangling over Cabinet posts a point of key consideration.

Anticipating a strong showing, Meloni made statements during the campaign saying that she and not any other party leader will be deciding policy and appointments in a potential new government—a move intended no doubt to send a message to the leaders of Lega and Forward Italy.

Her relationship with Berlusconi and Lega head Matteo Salvini is likely to be most contentious around issues relating to Russia and Italian support for Ukraine. Both Berlusconi and Salvini are known appeasers of Russian President Vladimir Putin who will surely attempt to move Meloni off her stated positions opposing Russian aggression and continuing to support Ukraine.

On China, Italy has an opportunity to align itself further with the U.S. on this issue. Meloni is likely to have an easier time, with her coalition skeptical of China and supporting a more realistic approach to relations with Beijing.

The new government’s stances on social issues, migration, and skepticism toward the European Union have led many commentators to practically warn of the dawn of a new dark age, with dire consequences soon to come.

Some of this wariness originates in Brothers of Italy’s checkered past. The party has struggled to distance itself from its origins in the post-World War II parties founded by Italian fascists. Meloni herself has written that she “does not belong to the cult of fascism.” Still the stain will never be fully erased.

Today, Brothers of Italy aligns itself with conservatives. It is currently “a member of the European Conservatives and Reformists Group in the EU Parliament, which includes other conservative political parties, such as Poland’s Law and Justice Party, Spain’s Vox party, and formerly the U.K. Conservative Party.

These parties are sometimes lazily portrayed in the mainstream media as “far right,” but this is an unfair caricature. There are certainly radical, far-right parties in Europe, but those parties are not among them. Rather, by and large, they hold similar policy views to conservative Americans and most of the Republican Party membership.

While the results of the Italian elections are historic, it’s important not to rush to judgment. Much remains unknown: Meloni is a new leader whose popularity stemmed in no small part from being perceived as an outsider (a mantle Lega ceded when it joined a prior government coalition), and governing may tarnish some of Brothers of Italy’s shine.

Furthermore, the internal dynamics of the coalition have yet to be illuminated. For those cheering or bemoaning the election results, the answer is to wait and see how the new prime minister governs.

As I wrote in a recent piece:

Reading the tea leaves of a potential [Brothers of Italy]-led government leads one to conclude Italy could, in the best-case scenario for the U.S., find itself with an administration that takes a robust stance against China and Russia in the framework of an overall transatlanticist approach.

The company [Brothers of Italy] keeps in EU Parliament as a member of the European Conservatives and Reformists Group certainly indicates the party could very well govern more conservative than populist. However, the reality is that [Brothers of Italy] is still relatively new and has not yet led a government, so nothing is certain.

What is for certain is that Italy has a chance for unusual political stability, and that the incoming prime minister can embrace a conservative policy agenda that will be beneficial to Italy as well as the broader transatlantic community.

Meloni has thus far given every indication she is a conservative. Let us hope she governs that way.