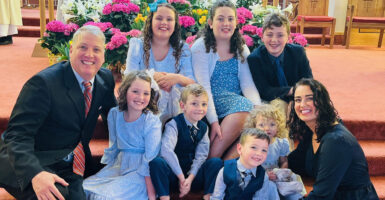 Mark Houck, a pro-life, Catholic activist arrested last week by the FBI, plead not guilty to federal charges on Tuesday related to an October 2021 incident wherein he allegedly pushed an abortion clinic volunteer.

Authorities have charged Houck with violating the Freedom of Access to Clinic Entrances (FACE) Act, which criminalizes the use of force to intimidate or obstruct someone from getting or providing an abortion. On Tuesday, the father of seven plead not guilty to two counts, Fox News reported.

Houck’s attorney said that President Joe Biden’s Justice Department is pushing the charges as a form of “political prosecution,” the publication reported, noting that the case was already thrown out by the state court. Attorney Peter Breen added that the Justice Department is treating Houck, a long-time pro-life activist, as if he were a “drug lord or a mafia boss.”

“It put officers’ lives in danger,” the lawyer said. “It put the Houck family in danger. And it was an utter waste of judicial resources and taxpayer resources.”

Houck has not responded to requests for comment from The Daily Signal.

The Daily Signal’s Gillian Richards contributed to this report.