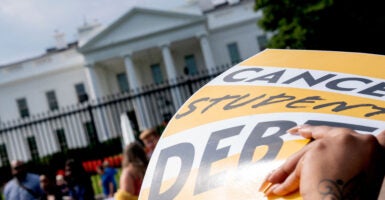 A new lawsuit against President Joe Biden's student loan bailout plan has been filed by the Pacific Legal Foundation on behalf of an employee whose student debt would be affected by the scheme. (Photo: Stefani Reynolds/AFP/Getty Images)

Adam Kissel is a visiting fellow in the Center for Education Policy at The Heritage Foundation.

Probably the most common legal argument against the Biden administration’s student loan bailout plan is that the federal Department of Education simply doesn’t have the authority to accomplish it.

That’s a core argument in a new lawsuit filed by the Pacific Legal Foundation on behalf of an employee whose student debt is affected by the bailout plan.

Putting aside the issues of unfairness, the legal arguments have always been persuasive. The challenge has been to find a plaintiff who will suffer a legally recognized injury necessary to get into court.

The Pacific Legal Foundation has found a whole group of plaintiffs.

The organization’s client, Frank Garrison, has been paying down his education debt using Public Service Loan Forgiveness, a program that will forgive his remaining debt after he makes 120 qualifying payments. He’s about halfway through. He also is using the Income-Driven Repayment program, which caps his monthly payment based on his discretionary income.

Various problems with such federal programs and loan forgiveness in general have been described elsewhere, but here these programs mean that Garrison would have had his loan balance zeroed out after about 60 more months, with modest payments along the way.

Now, the loan bailout would automatically cancel $20,000 of Garrison’s debt instead, subjecting him to Indiana’s income tax, while doing nothing to improve his monthly payment due to his Income-Driven Repayment participation. He will owe about $1,000 to Indiana simply because the U.S. Department of Education is changing the rules.

Since several states treat loan forgiveness the same way, there are people across all of those states in the same boat. There are probably a lot of borrowers, among the 8 million qualifying Public Service Loan Forgiveness borrowers nationwide, who also are using the Income-Driven Repayment program in these states.

That’s enough for Garrison and the others to get into court. The key point of the HEROES Act is that borrowers “are not placed in a worse position financially” in relation to their student loans because of a war or other national emergency, but the Department of Education is causing, not remedying, economic harm to people like Garrison.

That means several additional arguments get into court, too:

The Department of Education is making the same error here.

“The major questions doctrine,” the plaintiff notes, “requires a clear authorization by Congress of such an economically and politically significant action, which is lacking here. … Without a valid source of authority, the Secretary [of Education] ‘literally has no power to act’” (quoting a different case).

Congress gave no clue that hundreds of billions of dollars in a massive loan bailout was in the HEROES Act, because it isn’t.

Overall, the HEROES Act was never meant for massive cancellation of the obligation to pay back student loans. Furthermore, the bailout plan’s income cutoffs, its relief amounts unconnected to the pandemic emergency, and its arbitrary provision to double the relief amount if the borrower had ever received a Pell Grant (even decades ago), as I have written elsewhere, further show the Department of Education’s abuse of power—if it was properly delegated any such power in the first place.