‘Abuse of Power’: Lawmakers Tear Into DOJ for Arrest of Pro-Life Father in Front of Screaming Children 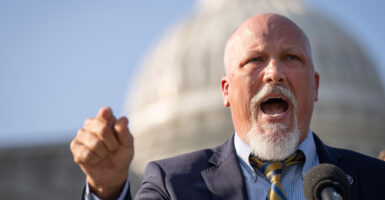 "This appears to be nothing less than a brazen continuation of the abuse of power by federal authorities against average American citizens that must stop," says Rep. Chip Roy, pictured at a news conference Sept. 15 in Washington, D.C. (Photo: Drew Angerer/Getty Images)

Republican lawmakers tore into the Department of Justice on Monday over the sudden and reportedly dramatic arrest of a pro-life father.

Members of the GOP reacted to reports that the FBI sent a “25-30 person swat team with guns drawn to target Mark Houck, a pro-life father of seven, for allegedly shoving a guy in front of an abortion clinic (while he maintains he was defending his 12-year-old son),” as Rep. Chip Roy, R-Texas, described it to The Daily Signal.

“This appears to be nothing less than a brazen continuation of the abuse of power by federal authorities against average American citizens that must stop,” Roy told The Daily Signal on Monday.

“We owe the American people congressional hearings to provide public and transparent accountability for any and all wrongdoing,” he continued. “Even further, the FBI needs a complete and total overhaul to return primary law enforcement power to the states and to get the Bureau out of the business of politics once and for all.”

“The kids were all just screaming. It was all just very scary and traumatic,” Ryan-Marie Houck shared with the pro-life outlet, adding that her husband pleaded with the agents to be calm and not scare his children. The agents were holding “big, huge rifles,” she said, “pointed at Mark and pointed at me and kind of pointed throughout the house.”

“Our staircase is open, so [the kids] were all at the top of the stairs which faces the front door, and I was on the stairs as well, coming down,” she said.

Hawley noted that authorities obtained a warrant under the Freedom of Access to Clinic Entrances (FACE) Act to arrest Houck for “allegedly committing a single count of simple assault by pushing a man near an abortion clinic.” The FACE Act forbids preventing or obstructing anyone from going into an abortion clinic to provide or obtain an abortion.

“Houck contends that he only did so to defend his child against the man, and local authorities have already dismissed a separate criminal complaint against Houck for the same conduct,” Hawley continued. “Not only did your office turn a local dispute into a national case, but the FBI reportedly executed the search warrant in as extreme a manner as one can imagine.”

The senator also pointed out that Garland’s office has “so far turned a blind eye to the epidemic of violence across the country by pro-abortion extremists against pregnancy resource centers, houses of worship, and pro-life Americans—violent acts that are prohibited by the very same law under which you are charging Mark Houck.”

It does not appear that the Justice Department is prosecuting anyone in relation to these crimes under the FACE Act, which also includes safeguards for houses of worship. The FBI did not immediately respond to requests for comment from The Daily Signal on this point or others related to Houck’s arrest.

According to Republican Indiana Rep. Jim Banks, Garland’s inaction on the attacks on pro-lifers should come as no surprise.

“Merrick Garland sent a press release attacking the Supreme Court’s Dobbs decision, which explains why he’s ignored attacks on pregnancy centers and attempts to intimidate Justices,” he told The Daily Signal. “Criminals are criminals, no matter who they vote for and Republicans oppose violence in all its forms. But in recent weeks whistleblowers have confirmed that partisan politics hold sway at the Biden DOJ.”

FBI Philadelphia has contested the claim that a SWAT team went to Houck’s home for the arrest, with an unnamed spokesperson telling Fox News, “There are inaccurate claims being made regarding the arrest of Mark Houck. No SWAT Team or SWAT operators were involved.”

FBI Philadelphia and the U.S. Attorney’s Office for the Eastern District of Pennsylvania have not responded to requests for comment from The Daily Signal.

The FBI has not denied to The Daily Signal that 25-30 agents showed up early in the morning at the family’s home with weapons drawn, as described by the family.

After his Friday arrest, Houck appeared before the U.S. Eastern District Court in Pennsylvania. He was indicted for violating the Freedom of Access to Clinic Entrances Act, which “makes it a federal crime to use force with the intent to injure, intimidate, and interfere with anyone because that person is a provider of reproductive health care,” the Eastern District of Pennsylvania U.S. Attorney’s Office wrote in a Friday press release.

Authorities released Houck later that day, but he now faces felony charges. If convicted, Houck could have up to an 11-year prison sentence and fines of up to $350,000.