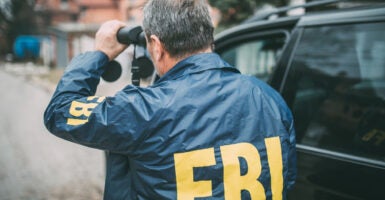 From the known facts, we have reason to doubt the legitimacy of this case. It likely is a politically motivated abuse of federal law by the FBI and the Justice Department. (Photo illustration: Nes/Getty Images)

In an early morning raid Friday in Kintnersville, Pennsylvania, about two dozen FBI agents with weapons drawn pounded on the door of Mark Houck’s home, where he lives with his wife and seven children.

The FBI agents arrested Houck based on a federal indictment. Sounds serious, right? Is Houck a domestic terrorist, an American jihadist, a dangerous militia member, a violent felon, or someone with a prior history of violence toward law enforcement who would require such an overwhelming show of force?

Houck is a pro-life activist and president of The King’s Men, a Catholic ministry. He has no prior criminal record. He was arrested Friday morning for an alleged violation of the federal Freedom of Access to Clinic Entrances Act, known as the FACE Act.

Again, sounds potentially serious. But given the Obama-Biden administration’s prior abuse of the FACE Act, as well as what we know already about the facts, we have serious reasons to doubt that this is a legitimate case and prudent use of federal law enforcement resources. More likely, it is a politically motivated abuse of federal law by both the FBI and the Justice Department.

It is not a coincidence, we suspect, that this takedown of someone who, at best, committed a misdemeanor assault came almost exactly three months after the Supreme Court issued its decision in Dobbs v. Jackson Women’s Health Organization, which overruled Roe v. Wade and abortion on demand in America. The FBI’s raid of Houck’s home was designed to send a warning to pro-life activists engaging in activities protected by the First Amendment.

The FACE Act (18 U.S.C. § 248) forbids physically obstructing, injuring, intimidating, or interfering with anyone “obtaining or providing reproductive health services.” But Congress specified that the FACE Act doesn’t “prohibit any expressive conduct (including peaceful picketing or other peaceful demonstration) protected from legal prohibitions by the First Amendment to the Constitution,” including the “free speech or free exercise clauses,” occurring “outside a facility.”

Houck apparently would regularly drive two hours from his home to a Planned Parenthood clinic in Philadelphia to pray and speak outside the facility, often taking his 12-year-old son with him.

The federal indictment claims that almost a year ago, Houck “verbally confronted” and “shoved” an escort for an abortion patient “to the ground” and “intentionally injured, intimidated and interfered” with the escort.

What the indictment fails to mention, say Houck’s wife and a family spokesman, is that on multiple occasions this pro-abortion escort said “crude … inappropriate and disgusting things” to the Houcks’ son, such as “your dad’s a fag” and other vulgar slurs.

Houck kept telling the escort to stop harassing his son, they say, but the escort refused to stop and when the foul-mouthed vulgarian got too close to his son, Houck protected him by shoving the escort away.

The escort fell down, but, according to Houck’s family, the only injury he suffered required “a Band-Aid on his finger.”

The incident occurred Oct. 21, 2021. The assault claim against Houck is so weak that not only did Philadelphia District Attorney Larry Krasner, a Soros-backed rogue prosecutor, refuse to file any misdemeanor charges against Houck, but, the family says, a civil lawsuit filed by the escort was thrown out of court.

Now, almost a year later, the FBI shows up at Houck’s home in force and the Justice Department charges him with two felonies for an injury that required a Band-Aid. His conviction could result, according to the Justice Department, in a maximum penalty of “11 years in prison, three years of supervised release and fines of up to $350,000.”

No doubt, Houck’s defense attorney will explore any and all defenses, starting with whether the man shoved by Houck even falls within the “obtaining or providing” requirement of the federal statute. It also may be a clear case of self-defense, since Houck apparently was defending his 12-year-old son from an adult who was harassing and intimidating a minor.

The fact is that the Justice Department, under Democratic administrations, has a history of misusing the FACE Act to go after abortion opponents.

In 2012, for example, a federal judge in Florida tossed out a FACE Act indictment against Mary Susan Pine, a  pro-life activist who had been conducting peaceful sidewalk counseling outside an abortion clinic for many years. The judge excoriated the Justice Department for the behavior of its lawyers, saying that the indictment seemed to be the “product of a concerted effort between the government and the [abortion clinic] … to quell Ms. Pine’s activities” rather than to enforce the statute.

The timing of this indictment of Houck also is suspect and calls into question the motive behind the Justice Department’s move. If this situation played out the way the Justice Department claims, even viewed in the light most favorable to the government this was, at best, two minor incidents of misdemeanor assault.

It’s significant that local authorities, including the Philadelphia District Attorney’s Office, decided not to file charges against Houck. It means that, for whatever reason, they didn’t even think Houck’s conduct warranted a misdemeanor assault charge, much less the two felony charges that he now faces.

Most likely, the local authorities didn’t file charges because, upon examining the facts, it was, at best, a case of “mutual combat” in which two adults got out of hand and ended up in a minor scuffle. In such cases, typically neither party is charged, and the case goes away.

If this was such an important violation of the FACE Act, what took the Justice Department 337 days to indict Houck? This is the simplest of simple, factual cases. Houck either pushed the escort twice, unprovoked, or he didn’t.

Perhaps the more important number is 91. That’s how many days elapsed between the day the Supreme Court issued its decision in Dobbs and Houck’s indictment. Or maybe it’s 49—the number of days between Houck’s indictment and the mid-term elections.

And why did the Justice Department decide to send armed FBI agents to Houck’s house in a show of force? Houck has no criminal record, is a man of faith, and is the father of seven children. He is no threat whatsoever.

Contrast this prosecution with the fact that vandals physically have attacked and damaged roughly 70 pro-life pregnancy centers, which also are protected under the FACE Act’s definition of a facility that “provides reproductive health services.”

So why hasn’t the Justice Department filed a single FACE Act indictment against anyone for those crimes?

Clearly, the leadership of the FBI and the Justice Department should be asked these and other important questions surrounding this case, as well as their lack of action against real threats.